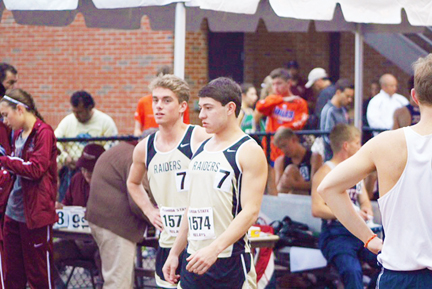 TALLAHASSEE – Three days after the Southland Raiders’ boys track and field team brought home a second-place finish at the Deerfield-Windsor meet on March 23, Southland distance runners, Wright Calhoun and Billy Calcutt, headed to Tallahassee to compete in the annual FSU Relays against some of Florida and Alabama’s top runners.
Calhoun continued to shave seconds off his own 3200-meter record, turning in a time of 9:44 for a ninth-place overall finish.
Calcutt followed with a season-best time of 11:08.
On less than an hour’s rest, with the drizzle turning to a steady rainfall, both runners returned to the track for the 1600-meter event.
Calhoun ran the distance in 4:35, just one second off his personal record set earlier in the week. Calcutt hit a personal record of 5:01 to place third in his heat.
With spring break underway, the Southland runners continue to train on their own and in small groups for the region meet, scheduled to be held at Hugh Mills Stadium in Albany on April 13.

GSW’s non-conference streak brought to a halt by VSU

From STAFF REPORTS AMERICUS – The Valdosta State University (VSU) baseball team scored in all but one inning on March... read more