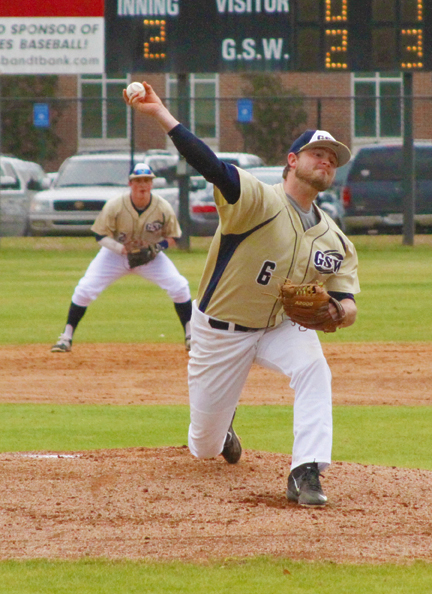 AMERICUS – The Georgia Southwestern State University (GSW) baseball team was swept in a Peach Belt Conference (PBC) double-header against Columbus State University (CSU) on April 3 at Hurricane Stadium in Americus. CSU won the opener, 12-4, and prevailed in a 13-inning marathon, 10-8, to wrap up the weekend series.
The Hurricanes ended the day with an overall record of 17-19 and a mark of 3-18 in the PBC while CSU improved to 26-10 overall, 12-6 in conference play.
In the first contest of the afternoon, CSU exploded for seven runs in the second inning and cruised to a solid victory.
Hurricanes starting pitcher Layne Gusler (1-6) exited in the fourth inning. Drew Powers covered three and one third innings of relief. Earl Dupree held the Cougars scoreless for the final two frames with one hit, one walk, and a pair of strikeouts.
Devyn Newberry and Alex Kranick contributed two hits apiece for GSW.
In the series finale, the Hurricanes rallied from a four-run deficit in the ninth frame to force extra innings, but it was a CSU game-saving catch in center field for the second out that prevented a walk-off win for GSW.
GSW had a runner in scoring position in each of the extra frames, including bases loaded in the 13th, but could capitalize only once (12th inning) to match CSU and keep the marathon going. The teams combined to use 11 pitchers in a contest that lasted four hours and 45 minutes.
Starting pitcher, Dylan Brown, threw five and one third innings for the Hurricanes. Mitch Holloway got GSW through the eighth. Chad Adkins was solid for four innings, holding the Cougars to one run without walking a batter and Matt Hubbard (0-1) took the tough-luck loss.
Dakota Long connected on three hits and brought in three RBIs for GSW. Devyn Newberry and Zach Barron collected two hits and two RBIs apiece.
GSW hosted Thomas University on April 5 for a non-conference tilt. The results of this match-up were not available at press time.
The ‘Canes return to action the next afternoon, hosting West Georgia at 5:00 p.m.