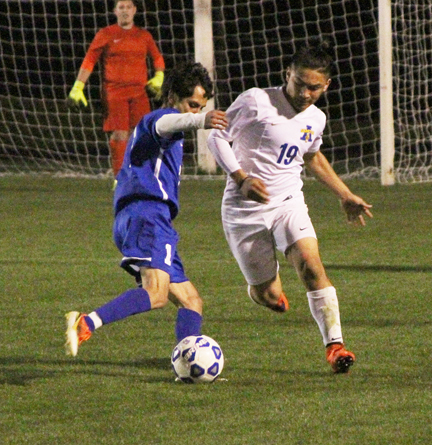 Michael Murray/Americus Times-Recorder: ASHS’ Rosendo Gonzalez looks for the opportunity to steal as a Crisp opponent prepares to shoot during the Panthers’ April 5 contest against the Cougars.

AMERICUS – The Americus-Sumter High School (ASHS) Panthers soccer team has climbed to an impressive 8-0 overall record on the 2016 season. The Panthers are currently 5-1 in region 1-AAAA competition. Most recently, the Panthers took on the Crisp County Cougars on April 5, eventually earning a 3-0 sweep of their visiting opponents.
The ASHS boys took charge early in the match, scoring all three of their goals in the first half of the competition. 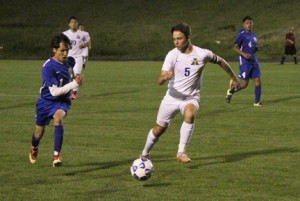 Michael Murray/Americus Times-Recorder:
ASHS’ Ali Elayman (5) dribbles down the pitch past a Crisp County defender during the Panthers’ April 5 tilt against the Cougars. Jonathan Abarca (10) follows close behind, ready to offer assistance. Abarca scored one goal and contributed two assists to the Panther victory.

ASHS’ Jonathan Abarca opened the action for the Panthers, with a Jose Ovando-assisted boot into the back of the net. The Panthers continued pressing forward, with Francisco Gonzalez adding a pair of insurance goals, each assisted by Abarca.
The Panthers hosted Warner Robbins High School on April 8 in Americus. The results of that match were not available at press time.
ASHS’ boys will continue their quest for a spot in the playoffs on April 12 as they travel to Adel to take on Cook County High School. The team will continue their road trip on April 14, defending their record against Thomas County Central in Thomasville. The Panthers return to their home pitch the next afternoon to host Cairo High School.
The Georgia High School Association state soccer playoffs are scheduled to begin on April 28-29.

By MICHAEL MURRAY ELLAVILLE – It was another huge day for the Schley County Wildcats baseball team as the squad... read more