Hurricanes wrap up week with one win, one loss on home diamond 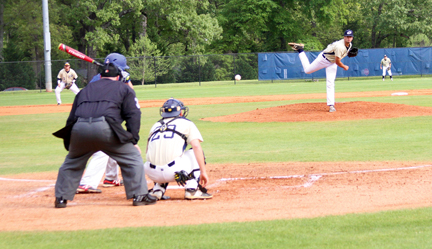 Michael Murray/Americus Times-Recorder: GSW pitcher, Mitch Holloway, throws a fast ball past a University of West Georgia batter during the second inning of the Hurricanes’ April 6 contest in Americus.

AMERICUS – The Georgia Southwestern State University (GSW) Hurricanes baseball team kicked off the week’s competition with a bang on April 5, earning a 5-3 victory over Thomas University on the heels of Devyn Newberry’s first homerun of the season.
The team, however, fizzled out the next afternoon in their home tilt against the University of West Georgia (UWG), as a slow start for the ‘Canes eventually sentenced the team to a 14-4 defeat.
Following the week’s action, the Hurricanes saw their overall mark drop to 18-20 on the 2016 season.
On April 5, the Hurricanes fell behind early to the Thomas University Night Hawks after three opponents crossed the plate in the second inning.
Following this rally, GSW pitcher, Kyle Spinks, shut it down with a quick ground out catch and throw to first to finish the inning without any further damage.
GSW scored their first run in the bottom of the third when Newberry singled to left field to plate Nick Fonseca who eventually went two for three at the plate. Zach Barron tied the game in the fourth off a two-run homer, bringing in Alex Kranick.
The Hurricanes’ pitching staff held off the Night Hawks for the remaining five innings.
Still tied going into the bottom of the eighth with a fresh Thomas University pitcher on the mound, Newberry swung at the first pitch to deliver the home run that put GSW one run ahead of the Night Hawks.
Evan Alderman drew a walk after Newberry’s dinger and proceeded to steal second base and then third. With two outs, Barron came up to the plate and belted an RBI single to give GSW a two-run win over Thomas.
Barron went two for four at the plate and brought in three RBIs.
The Hurricanes finished with 11 hits, five runs, five RBIs and four errors.
Spinks pitched five innings, threw 76 pitches, 49 of which were strikes, and faced 23 batters. Spinks earned six strike outs.
Coty Graham faced eight batters in his two innings pitched, threw 40 pitches, 23 of which were strikes, and struck out five.
Michael Ranieri (W, 1-0) took the win, pitching the eighth inning and faced four batters. Ranieri threw 16 pitches, had 12 strikes, and struck out two batters.
Chad Adkins closed the game for GSW and faced six batters in the ninth inning. Adkins threw 25 pitches, including 17 strikes, and struck out one opponent.
In the following day’s match-up, the ‘Canes looked to turn their previous win into a streak, but UWG had different plans.
UWG added three runs in the third frame, four in the fourth, and closed out the game with four more in the seventh.
GSW put a picket fence on the scoreboard by posting a run in four consecutive innings. Construction started in the second inning with an RBI single through the left side of the infield by Davey King. Brett Burgess then singled to center field in the third to plate Dakota Long. In the fourth inning, it was Alderman who swatted the RBI single. Alderman was back in the fifth to drive in another run, this time his single brought home Burgess.
Burgess finished three for four at the plate with an RBI and a run scored. Alderman collected two hits and a pair of RBIs.
UWG’s Garrett Hayes connected on all four of his at-bats with six RBIs and a double. Hayes scored twice to lead the visitors. Caleb Lopes and Dalton Rogers added two hits and two runs apiece. Rogers drove in four runners.
The two sides combined to use 10 pitchers in the seven-inning ballgame.
GSW starter, Mitch Holloway (2-3), was tagged with the loss after running into trouble in the first stanza. Holloway pitched two and one-third innings. Layne Gusler finished the third. Drew Powers, Earl Dupree, Jarrod Crum and Ranieri followed with an inning apiece.
UWG relief pitcher, Tritt Fennell (3-2) covered two and one-third innings to pick up the win.
The defeat marked the Hurricanes’ second non-conference loss of the season.
The Hurricanes will take a hard-earned break this week ahead of a trip to Tuskegee University on April 12 for a 4:00 p.m. non-conference tilt.
The ‘Canes return home for a three-game Peach Belt Conference series against Flagler College on April 15-16.