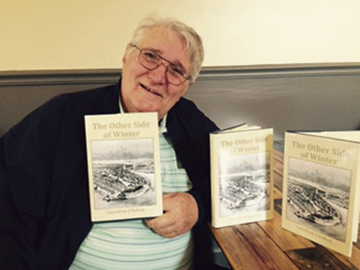 AMERICUS — Even though the right-brain, left-brain theory of thinking is a myth, Americus resident Larry Duhon, retired telecommunications engineer, is both an analytical and creative thinker.
Besides, he has a huge imagination that led him to write his first novel, “The Other Side of Winter,” published by Xlibris in February.
Duhon, 77, has had a successful and illustrious professional career in telecommunications. He worked as a consultant for major corporations, including IBM on key jobs from coast to coast; the principal designer for telecommunications for Texas Stadium in Irving, Texas, the assistant designer for the Dallas-Fort Worth Airport along with a long list of other chief assignments.
Now retired, Duhon and his wife Brenda, to whom he dedicates the book, have lived in Americus more than 25 years, moving here from metro Atlanta. They reside on Middle River Road.
So how does an engineer decide to write an historical novel?
“I love to create characters and manipulate them,” says Duhon. “I have had an amazing life and successful career, but I have always enjoyed writing; however, it was limited to technical articles for trade publications during my professional career. I am happiest when I am writing on my laptop.”
Duhon admits the transition from technical to fictional writing was somewhat difficult, although he has written short stories through the years, but only as a hobby, and he never sought to have them published. Then with his wife’s encouragement he launched into something more complex.
“Brenda always likes everything I write and with her support I decided to get started on the novel that took me about six months to complete,” says Duhon.
Duhon didn’t want the book to revolve around horror or sex.
“I wanted it to be a positive experience for the reader — a story that would make them feel good,” he says.
Duhon set his novel in the period from the late 1880s to post- World War I — a time he knew nothing about until researching it,  although as a child growing up in Edgerly, Louisiana, he listened closely to family stories from that time period. The characters aren’t based on actual people; however, one is patterned after his maternal grandfather, who Duhon describes as a gentleman in every manner of the word.
He explained the reason for selecting the era is America was developing in many areas ranging from transportation to communications, electricity and machinery.
“The period interests me,” says Duhon. “It opens in 1882,  because that’s the year my paternal grandfather and his family migrated to America from Germany. He was eight years old and they were brewers in their native country.
“I began writing almost every day and stored my work on my computer,” says Duhon. “I knew where I wanted the plot to go and how it would end, but I had to develop it. After I selected the characters I basically let the story progress and let it take me where it led me.”
Duhon talks about the novel’s characters like good friends. And apparently they are because they were part of his daily life for months. The principal among them is young Chester Lassiter, 22, a sales vendor from St. Helens, England, located about 22 miles from the port city of Liverpool. He wants to relocate to America to seek a better life but doesn’t have the means, and signs up for the indentured servitude program, which will pay for his trip in exchange for his becoming an indentured servant for three years once in the states.
“The indentured servitude program was abolished in 1919, and it interests me that people would basically sell themselves into slavery to get to America,” says Duhon, explaining why he used this as a major part of the book.
To pay for his voyage and against the advice of his friend, Lassiter goes to work for Global Shipping in New York City owned by Joseph Farnsworth, a shipping magnate and the character Duhon patterned after his grandfather. The plot thickens after Lassiter meets Lily Farnsworth, and their friendship leads to a deeper relationship and Lassiter’s dreams of a better life are filled with sacrifices, hardships and challenges.
After completing and editing his novel, the author investigated hiring an agent to represent him at various publishing houses but decided against this route, sending the work off himself to a number of publishers.
“I received rejections, but favorable responses from four, and I decided to sign on with Xlibris of Bloomington, Indiana,” he says.
“I feel good and very pleased about my book,” says Duhon. “The publisher went above and beyond expectations.” And he points out that he has learned there are three phases of writing: creative, finding a publisher and someone willing to buy it.
“The Other Side of Winter,” 186 pages, is available online and at Amazon, Barnes and Noble, and Books A Million in hard-bound and paperback. It is also available from the author’s website, www.laraodeanjduhon.com