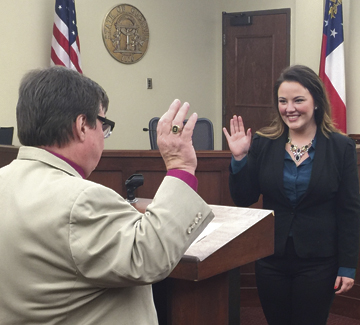 Southwest Circuit Superior Court Judge James Sizemore administers the oath of office to Stephanie Hennigen who is the newest assistant district attorney in the circuit.

AMERICUS — Stephanie Danielle Hennigan was officially sworn in as the newest Assistant District Attorney for the Southwestern Judicial Circuit on April 1. Hennigan previously served as the Law Clerk for the Southwestern Circuit, and will now continue to serve the Southwestern Circuit under the leadership of District Attorney Plez Hardin. Hennigan will serve Sumter County as well as Lee, Macon, Stewart, Webster and Schley counties.
Hennigan is originally from Shreveport, Louisiana, and is the daughter of David and Vanessa Hennigan. She attended college at Mercer University in Macon, Georgia. She graduated summa cum laude, with degrees in sociology and communications with a minor in criminal justice and completed the University’s Honors Program. She then went on to attend Mercer’s Walter F. George School of Law as a Woodruff Scholarship recipient, the highest scholarship awarded to only four of the top incoming students. She also accomplished a certificate in Advanced Legal Writing while at Mercer Law through the nation’s preeminent Legal Writing Program.
Hennigan then moved to Americus to be the attorney in chambers for the three Superior Court judges in the Southwestern Circuit. She handled matters dealing with everything from divorce to death penalty cases in her position as staff attorney. Additionally, she has become actively engaged in the Southwest Georgia area. She is a highly involved member of the Americus Kiwanis Club as well as a graduate of the Leadership Sumter Program.
Hennigan is thrilled to become member of the District Attorney’s Office, primarily focusing on juvenile and state court cases. When not in the courtroom, she enjoys obstacle course racing, kayaking, and traveling.
Hennigan says, “It is an honor to be working for the District Attorney’s Office. I have thoroughly enjoyed getting to know the community, and I am excited to begin representing the State of Georgia as a prosecutor in the Southwestern Circuit.”

RICHLAND — On Sunday, April 24, there will be a unique opportunity to meet some 30 local food and beverage... read more