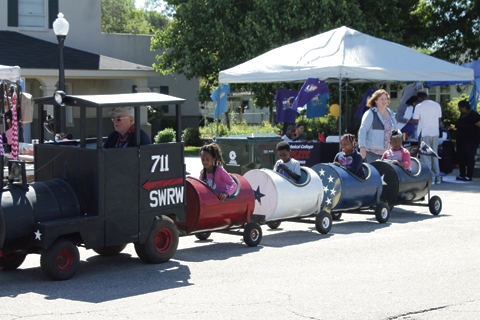 Enjoying the train ride around Springtime Ellaville were Janelle Range, 7; Brianna Range, 9; Jeffery Larry, 5; and Hailey Williams, 7. The train was built by and is engineered by Marvin Baugh, a native of Ellaville, who is mayor of Andersonville.

ELLAVILLE — The annual Springtime Ellaville festivities started out amid sunshine and cool breezes, as children ran playfully among the crowds covered with colors of the rainbow.
“The run made me feel colorful and happy,” said Bekah Bowen, a participant in the, “Boot Scoot Color Run,” a fun run which consisted of a one-mile run and a 5K run in which all participates are  showered with bright, brilliant powdery colors.
As vendors began busily cooking up sausage dogs, Philly cheese steaks, soul food and the scent of funnel cakes filled the air, the crowds gathered for an invocation from Joel Smith of Ellaville Baptist Church. Next, the crowds quieted as the National Anthem was performed by Alecia Cobb.
Among an array of games, rides and events of the day included the Schley County Fire and Emergency Services (SCFES) Corn Hole tournament and the mid-day parade which was themed around the Wizard of Oz, “No Place like Home.”  According to Carol Lawhorn, festival chair, taking first place was the float from Ellaville Baptist Church; second place went to Pleasant Hill Baptist Church. The first place marching unit prize went to the Schley County High School Marching Wildcats Band, with Southern Gun Slingers coming in second. Other  winners were Deep South Canine Rescue in first place and tying  for second were Grand Marshal Dorothy and the Schley County Homecoming Court. 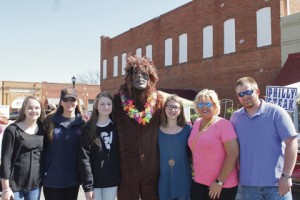 According to Schley County volunteer firefighter Chad Brown, winners of the Corn Hole tournament included: first place Chuck Bronson and Billy Childers, and second place Cody Patrick and Clay Patrick.
Vendor David Raulerson and his wife Mary from Buena Vista said it was their first year participating in the festival and they were having a time explaining their Squirrel Aggravator, which was a contraption which Raulerson had created to entertain squirrels.
“The squirrel jumps up here,” he said, showing where the squirrel jumps up to get the corn, but the squirrel’s weight makes the aggravator rotate, causing the squirrel to be thrown off.
“It’s entertaining and hilarious,” he said showing his shirts for sale which have Yosemite Sam saying, “If God didn’t want us to have guns, he wouldn’ta given us a trigger finger.” Raulerson said his wife makes aprons and also embroiders. 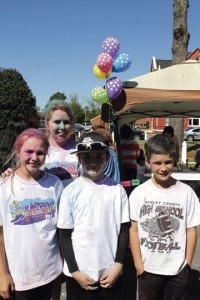 Another vendor Delton Perdue from Cochran said this was his second year attending the festival. He specializes in custom-made swings and other lawn furniture.
Among children’s activities was a train ride which was conducted by 81-year-old Marvin Baugh, mayor of Andersonville.
“I was born and raised in Ellaville,” Baugh said, explaining that he has lived in Andersonville for the last 25 years. Baugh said he attended the festival last year and another man had a train,  so he decided to go home and build a train and ride children in the festival.
“I have a lot of fun and it brings out the kid in you. If a child comes up and he doesn’t have a dollar he can ride anyway,” Baugh said.
Baugh said he built the train over a period of three months. The train was named the “SWRW” which stands for Southwest Railway, which brought the Andersonville prisoners to Camp Sumter during the Civil War. He also said the “711”, a number painted also on the engine, was the historic train wreck which happened in Ellaville in 1948.
Among other vendors was the Deep South Canine Rescue, an organization gathering donations to help save the lives of dogs by finding foster homes for them until a permanent home is acquired.
“We are just asking for donations to help pay our vet bills,” said Adoption Coordinator Ruth Hoch. Also the president of the Rescue Pam Dixon and Volunteer Vicki Bailey expressed their passion for the rescue efforts in the Schley County area and how grateful they are for those who are presently adopting their pets into good homes.
Another vendor was Well’s and Welch Department Store from Buena Vista selling Simply Southern T-shirts, live Oak Ducks and a variety of Georgia and Western boots. “We, my family business, has been in Buena Vista for 60 years. We have a little of everything for the whole family,” said Misty Tibbitt explaining it was their second year attending the festival. 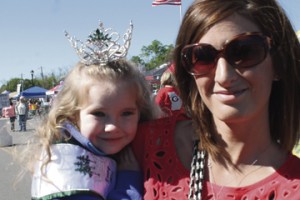