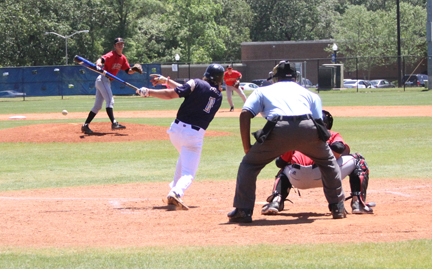 Michael Murray/Americus Times-Recorder: GSW’s Devyn Newberry belts a grounder past the Flagler pitcher in the series closer on April 17 in Americus. Newberry is currently enjoying a nine-game hitting streak for the ‘Canes.

‘Canes win 2 of 3 against Flagler

AMERICUS – The Georgia Southwestern State University (GSW) Hurricanes baseball team wrapped up three of the four games in their final home stretch over the weekend, earning two victories and dropping one decision to Flagler College in Americus.
The ‘Canes rebounded from a 10-3 loss in game one of the series to earn a 4-2 victory in the April 16 nightcap.
The following afternoon, the Hurricanes capped off the series with a 3-0 victory.
Following the trio of games, GSW evened its overall record this spring to 21-21 and improved to 5-19 in the PBC. Flagler dropped to 23-17 overall, 11-13 in conference play. GSW claimed its first conference series win since March 2014, when the opponent was Lander University.
The Hurricanes improved to 17-0 this season when holding opponents to less than six runs.
Flagler erupted for six runs over the final two innings to pull away from the Hurricanes in game one of the series.
The Saints jumped out to a 4-0 lead before GSW chipped away at the deficit with a run in the third inning on Dakota Long’s RBI single and two more runs in the seventh to pull within one after an Alex Kranick two-run single.
Hurricanes starting pitcher, Jordan McIlwain (4-4), threw 106 pitches and lasted seven innings before making way for Chad Adkins. McIlwain surrendered all four of his runs in the third and held Flagler to four hits. Adkins struggled over two-thirds of an inning and Matt Hubbard tossed the final one and one-third.
Devyn Newberry went three-for-five at the plate in the opener and scored twice. Kranick was two-for-three with a walk.
The Hurricanes turned their luck around in the second contest of the afternoon, as both sides picked up all of their runs in the second and eighth innings. Flagler scored once on each occasion while GSW answered with a pair both times.
Will Redding produced the big hit for GSW in the second inning with an RBI double down the right-field line.
After Flagler had tied the game at 2-2 in the top half of the eighth, GSW loaded the bases in the bottom of the frame and plated the decisive score on a high chopper to the shortstop by senior Brandon Weaver. On the Hurricanes next at bat, Newberry beat the throw for an infield single to bring home the final run of the evening.
Kyle Spinks opened with five innings on the hill for the Hurricanes in his second start of the spring. He held the Saints to one run, walked four batters, and struck out five. Coty Graham tossed two scoreless innings and Mitch Holloway (3-3) fought through a shaky start to retire Flagler in order in the ninth after allowing a run in the eighth. Holloway did not walk a batter and struck out two in two innings of work.
Redding collected three hits, two of which were doubles, and an RBI for GSW. Newberry added two hits and drove in a run. GSW was out-hit, 11-7.
Flagler got two-hit performances from Bryce Evans, Jake Hathaway and Nick Oberg. 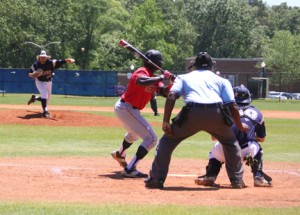 Michael Murray/Americus Times-Recorder:
GSW pitcher, Dylan Brown, whizzes a fastball past a Flagler batter during the second inning of the ‘Canes’ April 17 match-up in Americus. Brown pitched seven innings in the match, striking out six batters.

The next day, left-handed starting pitcher, Dylan Brown, threw seven scoreless innings in the series closer to guide Georgia Southwestern to a 3-0 win and a PBC series victory over Flagler College at Hurricane Stadium.
The last time GSW tossed a shutout in PBC play was almost a year to the day when the Hurricanes tallied a 1-0 victory on April 18, 2015. The opponent was Flagler. The starting pitcher was Brown.
Evan Alderman ripped the game-winning single in the third inning to plate Davey King.
Back-to-back RBI doubles in the fifth inning gave the Hurricanes some breathing room. Alderman dropped one in the right field corner to score Newberry and Kranick followed on the next at bat with a shot to the gap in left center field to bring around Alderman.
Brown (4-0) scattered five singles over his seven innings on the hill, walked two and struck out six. Earl Dupree was strong coming out of the bullpen as he held the Saints to a pair of singles over two innings, did not walk a batter, and struck out two for his first save of the spring.
Alderman finished with two hits, two RBIs and a run scored. Long went two-for-four and Newberry extended his season-best hitting streak to nine games.
The Hurricanes wrap up the home portion of their schedule on April 20 when they host Albany State at 5:00 p.m.