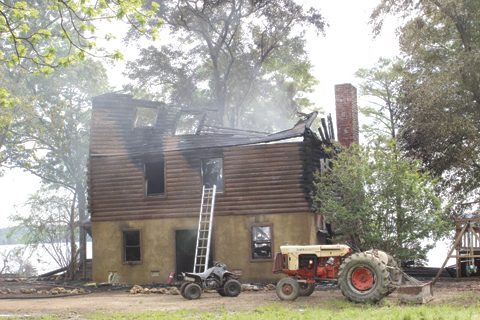 This was the scene Friday morning after a fire of undetermined cause consumed this home at 191 Culpepper Road on Lake Blackshear in Sumter County.

COBB — An early Friday morning blaze has cost the Zackary Wade family their home and possessions, as well as two of their  pets.
Chief John Ekaitis of Sumter County Fire & Rescue (SCFR) told the Times-Recorder that they were notified at 3:51 a.m. of a structure fire at 191 Culpepper Road. The Lake Blackshear fire station is only about a mile from the fire scene, he said.
Upon arrival, three minutes later, fire personnel from SCFR, the Leslie Volunteer Fire Department, and the Crisp County Fire Department fought the flames which had consumed some 75 percent of the two-story house upon their arrival, according to the chief. Meanwhile, Goldstar EMS and the Sumter County Sheriff’s Office stood by.
Ekaitis said that three engines, two tankers, and total of 28 firefighters battled the fire and it was brought under control in an hour and 10 minutes. He said it was a total loss.
The cause of the fire was unknown, but Ekaitis said a SCFR investigator was on the scene Friday morning.
A source close to the Wade family said Zackary Wade saved two of the family’s dogs from the blaze, but suffered smoke inhalation while attemtping to rescue the other two dogs, who perished in the fire. Wade was treated and released at Crisp Regional Medical Center, the source said.