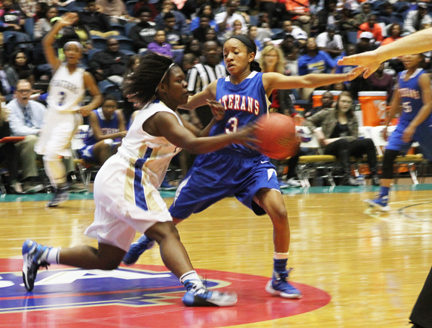 AMERICUS – Georgia Southwestern State University head women’s basketball coach, Kelly Britsky, has announced the signing of Kya Cochran from Veterans High School (VHS) in Kathleen, Ga., to a national letter of intent to play for the Lady Hurricanes in the fall of 2016.
Cochran averaged 10.0 points per game, 4.1 assists, 3.1 rebounds, and 2.5 steals during her senior year for the Warhawks. The 5’ 2” guard earned 2016 Atlanta Journal Constitution All-State Second Team honors and was named to the Georgia Athletic Coaches Association South All-State First Team. She racked up All-Region 2-AAAA and All-County honorable mentions her sophomore year and followed with back-to-back first team accolades, including All-Region Player of the Year distinction this past season.
“We are super excited to have Kya as a part of the Hurricane family,” Britsky said. “She comes from a great family, a great school, and a great basketball program.”
Cochran was named MVP of the Warhawks basketball team in 2015-16 along with being named the Sportsmic All-County Player of the Year as VHS advanced to the Georgia High School Association Class AAAA State Championship game.
“We are looking for good things from Kya and can’t wait to get her on campus this fall,” Britsky said.
Local women’s basketfall fans may remember Cochran as the point guard for the Lady Warhawks, whom the Americus-Sumter High School Lady Panthers faced in the 2016 state championship game.
According to reports, Cochran was instrumental during her break-out season in helping propel the Lady Warhawks to the state championship.
Cochran tossed in 11 points for her team during the championship match, brought down eight rebounds, dished out three assists, and nabbed four steals.