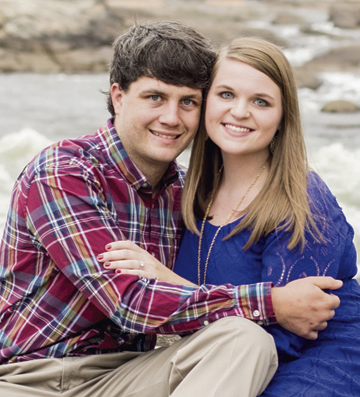 Carl and Karen Willis of Americus announce the engagement of their daughter, Rebecca Willis of Americus, to Michael Bryan Wells of Buena Vista, son of Jay and Faye Wells of Buena Vista.
The bride-elect is the granddaughter of Lamon and Jean Moates of Americus, and Marion Groover and the late John Groover of Americus. She is a 2009 honor graduate of Americus-Sumter County High, and a 2013 magna cum laude graduate of Valdosta State University where she obtained a bachelor’s of education in communication sciences and disorders. She obtained  her master’s of education in communication sciences and disorders in 2014, from Valdosta State University. She currently works at Sumter County Elementary School in Americus as a speech-language pathologist.
The future groom is the grandson of the late Glenn and Edna Wells of Buena Vista and the late W.D. and Swillie Knowles of Milan. He is a 2009 honor graduate of Marion County High School and a 2015 graduate of Georgia Southwestern State University where he received a bachelor’s of science in nursing. He currently works as a registered nurse at St. Francis Hospital in Columbus and Magnolia Manor in Buena Vista.
The wedding will take place at 5:30 p.m. on May 28, 2016, at the bride’s home church, First Baptist Church in Americus.