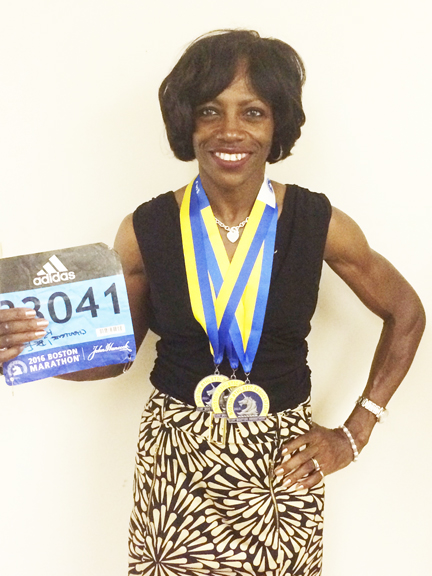 BOSTON – Local running enthusiast, Charlene Pennymon recently participated in the 120th Annual Boston Marathon on April 18. This year marked her fourth time participating in the event.
Pennymon completed the race in 3:52:15, just a hair over her 2015 finishing time. In a field of 26,639 runners, 42 wheelchair participants, and 25 hand-cycle racers, Pennymon finished the race, coming in at number 14,554 overall. Among a total of 12,168 female racers, Pennymon wrapped up the trek in 5,256th place. Among women between the ages of 50-54, Pennymon finished 305th among 1,254 participants.
After her triumphant return to Americus, Pennymon stopped to talk with the Times-Recorder about her experience participating in the most famous marathon on Earth.
“My stats were very good this year,” she said in the interview. “I was a few minutes off of last year’s time, but my race statistics were actually better this year, so it’s kind of weird how it worked out. It was hotter then normal, so everybody’s time was a little bit off, but I had an excellent run.”
Asked if she intends to return for the marathon in 2017, Pennymon responded, “I sure do. If they accept my registration, I’ll definitely be heading back there.” 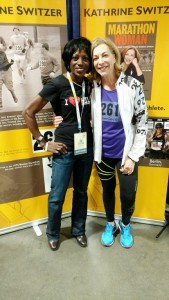 Submitted by Charlene Pennymon:
Pennymon stops to take a photo with running legend, Kathrine Switzer before the race. Switzer was the first woman to compete in the Boston Marathon in 1967 and is planning on participating next year in commemoration of the fiftieth anniversary of this milestone.

Pennymon went on to say that her time in this race qualified her for participation in next year’s event, but she will be required to wait until the information has been processed to receive official confirmation of her acceptance into the 2017 field of runners.
Pennymon said that, prior to the race, participants are bussed out of the city to a small town called Hopkinton, 26 miles outside of Boston. “We run back in, through eight towns, into Boston… Newton is the third to last town that we passed through. That’s where the hills start. That’s where the heartbreak hill is and several others… It is unreal. “
On the marathon’s security measures in the wake of the tragic 2013 bombing, Pennymon said, “It was interesting to see, this year, in Hopkinton that there were [armed security personnel] up on the tops of the buildings at the starting line dressed in SWAT-type gear… They were very nice people, but they were constantly on guard. It was interesting to see that…”
Asked what the most difficult part of the marathon was, Pennymon immediately answered, “The hills.”
“You’re tired by the time you reach mile 17,” she added. “Your adrenaline’s really pumping, but the last thing you want is to see the series of hills at the tail end of the run.”
Pennymon said that racers were treated to a pasta dinner the evening before the marathon because it helps runners store fuel as they prepare for the long trek.
Asked what goes through a runner’s mind on such a long exercise, Pennymon stated, “I actually just take in the scenery… I treat it as another day in the park, just like when I’m at home running… I’m really focused. I mostly just keep en eye on the horizon as I run. I concentrate on my breathing and try to keep up my pace and watch for runners in front of me… You’d think that, with almost 27,000 runners, there would be no way that you could run at your own pace, but you really can… Within the first mile or so, you’re able to get your rhythm going and the faster runners make their way to the front and the slower ones end up in the rear.”
Pennymon said that she generally begins training for the marathon at the end of January each year. She runs rigorously for around two months before tapering off her training in anticipation of the upcoming race. “My longest training run is 21 miles. I do that two weeks before the actual marathon and then begin to taper down to four or five miles. In the week before the marathon, I may run two or three times and that’s it… By Marathon Monday, my legs are well-rested and I’m just ready to go. I have all of this stored-up energy that I’m ready to get rid of and I have 26.2 miles to do it.”
On the most exciting part of the event, Pennymon said, “There’s something about it, as you approach Boston, and you come in on that very last stretch and turn onto Boston Street and see that finish line and the big press stand… It doesn’t matter how tired you are. It just puts a smile on your face,” she said.
Pennymon went on to marvel about the sheer number of spectators on the sides of the road during the marathon, saying, “They are lining the course six or seven people deep. It’s like they just shut the towns down. You can look up ahead of you and there is a sea of people. They’re holding signs and offering something to drink… There are musicians playing and there is just so much cheering that you don’t really have time to realize how tired you are. There is so much support the entire way. That makes a big difference… I get giddy just talking about it. It’s something you really have to experience.”
Pennymon said that, after completing the race, volunteers are on hand to provide refreshments and heat shields (to regulate body temperature) as well as award completion medals.
Following the event, racers were invited to the “Mile 27” party at Fenway Park, which Pennymon attended with her husband.

A culture changing celebration with a cut of a ribbon

South GeorgiaLEADS Board of Directors Announces Leadership Class of 2022 – 2023