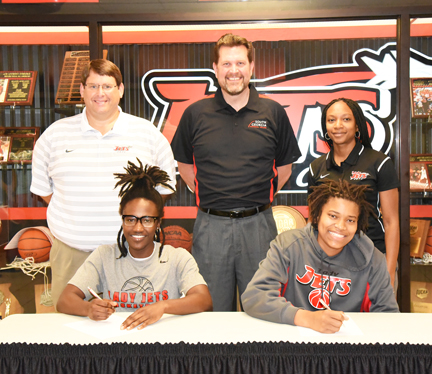 AMERICUS – South Georgia Technical College’s (SGTC) Lady Jets sophomores, Angela Tompkins and Brittney Delva, recently signed national letters of intent to play basketball at the Division I level for the 2016- 2017 season, announced SGTC Athletic Director and Lady Jets head basketball coach, James Frey.
Tompkins, a forward from Punta Gorda, FL, has signed a national letter of intent to play for the Wichita State Lady Shockers, a member of the Division I Missouri Valley Conference. Delva, a point guard from Tallahassee, FL, has signed with the University of South Carolina Upstate Lady Spartans, a Division I team in the Atlantic Sun Conference.
“I am so proud of Angie and Brittney,” said Frey. “They are both excellent basketball players but more importantly, they are excellent people. They are both extremely hard workers and will do an awesome job at the next level. We are certainly going to miss them.”
Tompkins was selected as a National Junior College Athletic Association (NJCAA) Division I Women’s Basketball first team All-American and she was the Georgia Collegiate Athletic Association (GCAA) Player of the Year for the 2015–16 season.
Tompkins played in 32 of the Lady Jets’ 33 games during the 2015-16 season and started in each of those games. She averaged 17.6 points and 11.1 rebounds per game for the Lady Jets. She hit 60 percent of her shots and was a 74.8 percent free throw shooter. She averaged 7.1 defensive rebounds and 4.0 offensive rebounds each game. She also contributed 1.7 assists, 1.6 steals, and 1.3 blocks in each outing.
Both Tompkins and Delva helped lead the Lady Jets to the GCAA regular season conference title this past season and a 27–6 overall record with a 14-2 performance in the GCAA. The Lady Jets averaged 73 points per game and held their opponents to an average of only 53.1 points. They also out-rebounded their opponents 47.2 to 28.8.
Tompkins will join former Lady Jets and NJCAA All-American honorable mention guard TaQuanda Mike from Savannah at Wichita State. Mike will be a senior at Wichita State this season. She was a member of the Florida International University Turkey Slam All-Tournament Team this season and named Newcomer of the Week for her performance on the court as a junior with the Lady Shockers.
Delva decided to join the University of South Carolina Upstate Lady Spartans next season in Spartanburg, S.C. For the third time during the Division I era, the USC Upstate women’s basketball team had the opportunity to play in the Women’s Basketball Invitational (WBI) Tournament this past season. USC Upstate was 20–11 overall and 10–4 in the Atlanta Sun for the 2015-16 year.   Delva was selected as the Lady Jets Most Valuable Player for the 2015-16 season. “She lays it all out on the floor every night,” said Frey. “She has been a better extension of me on the court for the past two years at the guard position. We could have won 20 games this season without any one player except for Brittney Delva. That’s why she was our MVP.”
The sophomore guard was also a member of the GCAA All-Academic team for the 2015-16 season. She played in 32 of the Lady Jets games this season and started in 31. She was on the floor over 30 minutes in each game. She averaged 5.3 points per game, shot 42.9 percent from the field and was a 45.5 percent three-point shooter. She hit 61.6 percent of her free throws.
Delva led the team in assists with 7.5 per game. She averaged 4.7 rebounds and 3.0 steals in each outing.
In addition to those two players, sophomore, Molly Brown, of Douglasville, recently signed a national letter of intent to play basketball with the University of Southern Mississippi Golden Warriors and sophomore guard, Cierra Bond, has announced that she will play with Oakland University in Michigan next season.