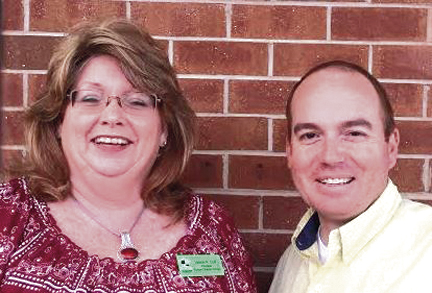 Submitted photo: From left, Valerie Duff and Jason Williams were recently selected tfor the roles of principal and vice principal of the Gurlow Charter School for the 2016-17 school year.

AMERICUS — The Furlow Charter School board of directors has announced the selection of the Furlow Charter School administration for the 2016-17 school year.
Valerie Duff, who served as Interim Principal in 2016, will continue her service as Principal for the 2016-17 school year, and Jason Williams will join the Furlow team as Assistant Principal.
Duff is a retired educator with 30 years of service with the Sumter County School System. She holds a bachelor of science and master’s degree in early childhood education and a specialist degree in school leadership and administration. Following 12 years of service as a classroom instructor for Cherokee Elementary School, she was promoted to assistant principal and held that position for six years prior to promotion to the role of principal at Sumter County Primary School. Under her leadership, the school was recognized as a Title 1 Distinguished School for the school years 1999-2011, and was recognized for the greatest gains in academic achievement in the state on several occasions. She has served on advisory boards for the School of Education at Georgia Southwestern State University as well as South Georgia Technical College and has supervised student teachers for Troy University.
Duff says, “The decision to return to work after five years of retirement was not an easy one. However, returning to the school environment in January caused me to recognize how much I’d missed the world of school. Having the privilege of working alongside educators so committed to making a difference for scholars is an absolute joy. I love being able to share in the successes of Furlow Charter School scholars and being able to interact with their families. Next year is going to be a terrific year for Furlow Charter School.”
Williams, a Sumter County native, was awarded a bachelor of science degree in political science and a bachelor of science degree in mathematics with an option in industrial mathematics, a master’s of business administration from Georgia Southwestern State University, and will be awarded a specialist in educational leadership from Columbus State University this summer. He served as Math Curriculum supervisor/teacher for the past five years at Webster County and served as Mathematics Department chair/teacher at Americus-Sumter County High School South Campus for six years prior. He has obtained educational leadership certification along with teaching certifications in over 20 fields. He has served on local, state, and national committees, has held regional, state, and national leadership positions in numerous organizations, and has been awarded numerous educational grants.  He is a lifetime member of the Georgia Council of Teachers of Mathematics and has made over 20 presentations at conferences for local, state, regional, and national organizations. Williams was recently recognized as Webster County’s 2016 STAR Teacher and has received numerous golden apple award recognitions from his students.
Williams believes teachers should guide and involve students in rigorous, relevant classroom instruction and learning while building relationships with students and helping them to learn real world skills, so students can be competent, contributing members of society no matter their age. He said, “Furlow Charter School (FCS) is great for Sumter County. The quality advisors (teachers) at FCS work with our scholars (students) in engaging project-based learning. Allowing students to recognize their potential while guiding and directing them in planning and preparing for their future is my focus as a teacher and now as an administrator.”
Williams and his wife Tasha, along with their two sons, Owen and Luke, live in Americus where they are members of Central Baptist Church.