The Americus Travelers 16-U baseball team is busily preparing to kick off their summer 2016 season.
Last summer, the Americus Travelers 15-U Baseball Club made it into the last possible game of the season; the “if necessary” game of the Grand Slam World Series, but finished as the runners-up to the Jefferson Parrish Bulldogs of New Orleans, La.
On May 21 this team, now a 16-U ball club, will begin their quest to reach that point again.
The 2016 version of the Travelers will look very similar to their 2015 counterparts, with two big additions. The team is comprised of players from Schley County High School, Lee County High School, Crisp County High School, Bainbridge High School and Sherwood Christian Academy.
Participants are hand-selected based on the talent level of each player in a specific role.
The coaching staff of Head Coach, Tim Estes, and Assistant Coaches, Jeff and Adam Fussell, will enter their fourth season together; having finished as the runners-up in the 2013 and 2015  seasons and as the number-four team in 2014. 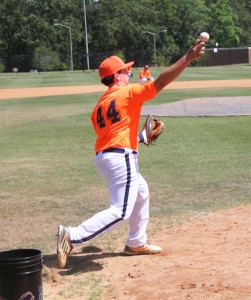 Michael Murray/Americus Times-Recorder:
The Americus Travelers’ Jarrod Wall, who also played the position of catcher for the Schley County Wildcats in the 2016 season, warms up as the team begins their training on May 15 in Americus.

In a recent press release, Estes stated, “The Travelers are anchored by their pitching staff.” Lee County left hander; Gavin Paul, will enter the season as the ace on the mound for the up-and-coming team. “The 6’5”, 190 lb. rising junior features a fast ball that can reach speeds in the mid 80s, excellent off speed pitches, and superb location,” Estes said. “Bainbridge High’s Will Kelley, one of the team’s new additions along with Schley County’s Chance Hollomon will both see a lot of innings this summer as well.”
Lee County’s Tyler Ross; a 6’3” right-hander, and fellow Lee County lefty and newcomer, Jacob Seymour, are also expected to hurl for the Travelers in the coming months.
In addition, Crisp County’s Will Lanneau and Schley County’s Reid Ragsdale will get some spot duty on the hill as well. One of the past Travelers pitchers, Cameron Belcher, is recovering from surgery and it is hoped that he will be able to rehabilitate and get some innings in toward the end of the summer, accoding to Estes.
“Always known for their defensive play, the Travelers feel that the 2016 team is much improved over last season’s solid defensive squad,” said Estes.
Schley County catcher, Jarrod Wall, and Lee County’s Will Lang will alternate the catching duties.
Wall will also see some time at first base when Paul is pitching and Lang will play the hot corner (third base) when Kelley is on the mound. Lanneau will again anchor the middle infield at short stop and will be joined by Schley County’s Camron Vanlerberghe at second base. Paul is expected to see the bulk of the innings at first base.
The Travelers’ outfield will have Sherwood Christian’s Jarrett Kemp in left field along with Seymour. Ragsdale will be holding down centerfield with Tyler Ross and Chance Hollomon splitting time in right field.
“We feel like our defense will be as good as it’s ever been” said Estes. “The rotations we have worked out for the back-up to play when the starter is pitching maximizes everyone’s playing time and that keeps everyone happy, it builds comradery and creates positive team chemistry”.
“On the offensive side, the Travelers have improved in power and speed,” Estes continued. “The addition of Will Kelley has given us that big bat in the middle of our line-up that we’ve been missing for a couple of years… Along with additional power, Jacob Seymour is very quick and when you throw him in there with guys like Kemp, Ragsdale, Lanneau, Vandy and Ross who all have better than average speed we feel like we can put some pressure on the opposing team’s defense and be a little aggressive on the bases”.
As always, the Travelers will use a tried-and-truel approach to playing the game that relies on execution of the basics and playing “small ball”. “Any fans who are familiar with Travelers baseball will tell you that this approach has brought great success to the program and you can expect more of it in 2016,” Estes said. “I believe in getting guys on early, moving them over by bunting or maybe playing some ‘hit-n-run’. We teach guys to be team players by sacrificing themselves for the betterment of the team. A productive out is a positive as far as we’re concerned so we hit behind runners a lot. Each player is taught to know their approach at the plate based on the situation, whether that’s a bunt a hit-n-run, a sacrifice fly, or whatever else is best for the team. Then, if we’re able to build a solid lead we relax on that a little and let them be more of a free swinger.”
The Travelers’ 2016 season is scheduled to begin May 21-22 in Montgomery, Ala. at the Capital City Classic. Many of Central Alabama’s college coaches will be in attendance at this event.
The following weekend (Memorial Day Weekend), the Travelers will be a part of the World Wood Bat Tournament, sponsored by Perfect Game.
On June 3-5, the team will return to Troy University for the Post 70 Invitational.
On June 9-10, the team will participate in the Parkview Shootout in Gwinnett County. “This is a 120-team tournament that is heavily scouted by college coaches and professional clubs,” Estes said.
The last weekend in June, the team will travel to Cumming for the Triple Crown Summer Blowout, featuring 16 of the top teams in the Southeast.
On July 9-10, the Travelers will return to Americus for a Saturday-Sunday double-header as part of the Travelers Weekend Challenge. They’ll end their summer season on July 24 – 30 at the Grand Slam World Series in Panama City Beach, Fla.