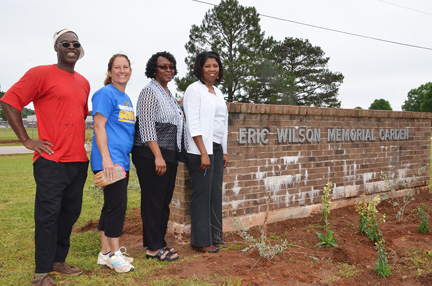 When Sumter Intermediate School Principal, Sharon Marcus, moved into her new building after the school realignment this year, she noticed a brick wall on the front lawn with the words “Eric Williams Memorial Garden.”
“I looked at the sign, but I had no idea who Eric Williams was,” she said.
In time, she learned that he was a former sixth-grade student in what was then Sumter County Middle School, who died in a car crash in 1994. Not only that, he was the son of the Intermediate School’s Bookkeeper, Ruby Williams.
Sumter County Board Member Sylvia Roland, also noticed that the “garden” had nothing but lawn in front of, and behind it.
It said ‘garden’ but there wasn’t one there,” Mrs. Roland said.
So the principal and the school board member set out to remedy the situation. Principal Marcus decided she wanted plants that would attract butterflies so the students could enjoy them. Mrs. Roland and her yardman, Johnny Mitchell, created a garden both in front of, and behind, the memorial plaque which features “Butterfly Plants,” designed to do exactly what Principal Marcus intended.
When it was created in 1994 under the leadership of then Principal, Carolyn Hamilton, and the school’s parent-teacher organization, the garden had been an active bed for flowers and plants of all sorts. In fact, Williams said that the garden became something more than a memorial to her son.
“Through the years, other parents who had lost a child in the Sumter County School system would plant a flower or bush there in memory of their loved one,” Williams said.
Eric Williams died when a car driven by his cousin on a road which was under construction. The driver attempted to turn back onto the higher part of the pavement. When the car hit the ridge, it flipped over. Eric was the only fatality. Williams remembers Eric as someone who loved sports and who was a fun person to be around.
“He loved his classmates and he got along with just about everyone,” she said.
When Williams came to work at the school in 2008, after having worked at the Elementary School, her parking place brought her face to face with her son’s name every morning, an occurrence that filled her with great joy.
“When I first came in each day it just lifted my spirts,” she said. “Just knowing that someone was thinking about him, the memorial will always be out there so people will always remember his name.”

ASHS to graduate 42 students with honors

From STAFF REPORTS AMERICUS – Americus-Sumter High School will soon be saying good-bye to 42 seniors who will be graduating... read more