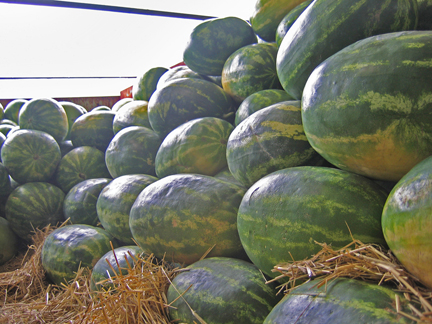 Photo submitted by UGA: Georgia watermelons, shown above, have recently been harvested for delivery.

Winter’s warmer temperatures a boost for some Georgia watermelon farmers

Winter’s mild temperatures and sunny days helped some Georgia farmers keep from falling behind with their watermelon plantings this spring, according to University of Georgia (UGA) Cooperative Extension vegetable horticulturist, Tim Coolong.
A number of growers were delayed by this spring’s rainy weather, but the sunny and warm weather in February and early March meant that some transplants were ready days ahead of schedule. “Acreage that was planted in early March, during a warm spell, put on quick growth after planting,” Coolong said. “However, this period was followed by two weeks of cool, rainy weather that slowed the growth of transplants planted mid- to late March.”
“Some plants in the greenhouses were actually ready a few days earlier than they have been in the past couple of years, particularly 2014,” Coolong continued. “If you take into account those plants being a few days early, I think that, despite some delays in growth of later-planted acreage, we are roughly on par with previous years in regard to the watermelon planting season overall… The winter of 2014 was cold and we had a lot of cloudy weather. Plants just sat in the greenhouse and didn’t grow as fast.”
Georgia farmers begin planting watermelons in early March in the southern part of the state and continue planting into April. Some producers try to take advantage of the later market and plant their crop in mid-April.
According to UGA’s Georgia Automated Environmental Monitoring Network, 9.53 inches of rain and 19 rainy days were recorded on the UGA Tifton Campus between March 13 and April 16. During the same period, 13.18 inches of rain and 17 rainy days were recorded at the grounds of the Sunbelt Ag Expo in Moultrie, and 9.9 inches of rain and 18 rainy days were recorded at UGA’s C.M. Stripling Irrigation Research Park in Camilla.
While rainy weather delayed planting and kept Georgia watermelon farmers out of the field a bit this spring, producers now are hoping the rains will return.
“Up until a week ago, we’ve had our share of wet weather. The last weekend of March and first of April brought two consecutive weekends of big rain events. In the Tifton area, we experienced around six to eight inches of rain in those two events combined. Other parts of the state were up closer to 10 or 11 inches,” Coolong said. “Of course, a week can change everything, and it has been pretty dry this past week. We could actually use a shower.”
Coolong estimates that most watermelon plants will be ready for harvest in Georgia during the second or third week in June. Growers who were able plant early could begin harvesting as soon as Memorial Day, though Coolong believes they are in the minority.
Watermelons are one of Georgia’s most popular and profitable vegetables. According to the UGA Center for Agribusiness and Economic Development, watermelons raked in $134.2 million in farm gate value in 2014. The nearly 20,000 acres of Georgia land planted in watermelons could increase this year.
“During our winter meetings, when we went to the different counties throughout the state and talked to seed company representatives and county agents, it seemed that there were more acres at least planned to go in this year. Part of that was probably due to the decrease in commodity prices, specifically cotton,” Coolong said.