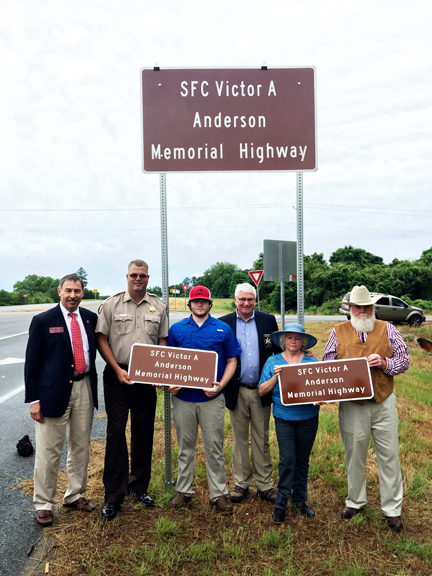 AMERICUS – State Representative Mike Cheokas (R-Americus), Sumter County Sheriff Pete Smith, and Schley County Sheriff Shane Tondee recently held a road dedication ceremony for the SFC Victor A. Anderson Memorial Highway in Americus on May 20. The road dedication honored the life of Sergeant First Class (SFC) Anderson and unveiled new signs for a portion of Highway 19 named in his honor.
“It was my privilege to sponsor the SFC Victor A. Anderson Memorial Highway Dedication,” Cheokas stated. “SFC Victor Anderson is a true American hero. He willingly sacrificed his life to protect the liberty and freedom that we enjoy. My heart goes out to his family who must continue to live each day with the burden of this great loss. SFC Victor Anderson has set the bar for patriotism at the highest level and his legacy will not be forgotten.”
House Resolution 1325 honors the memory of SFC Anderson by establishing a portion of State Route 19 in Sumter and Schley counties as the SFC Victor A. Anderson Memorial Highway.
SFC Anderson, 39, of Ellaville, served in the United States Army and Army National Guard for 22 years. He was killed in action while serving in Iraq as part of Operation Iraqi Freedom on July 30, 2005. He also served as police officer in his hometown of Ellaville, as a deputy sheriff in Sumter County, and with the United Nations Peacekeeping Mission in Bosnia.
His actions were recognized with a Bronze Star, Purple Heart, Combat Infantryman’s badge, Army Commendation Medal, and numerous other decorations.

By LEILA CASE Jane Sullivan of Americus has been a collector for years. As a child growing up in Huntsville,... read more