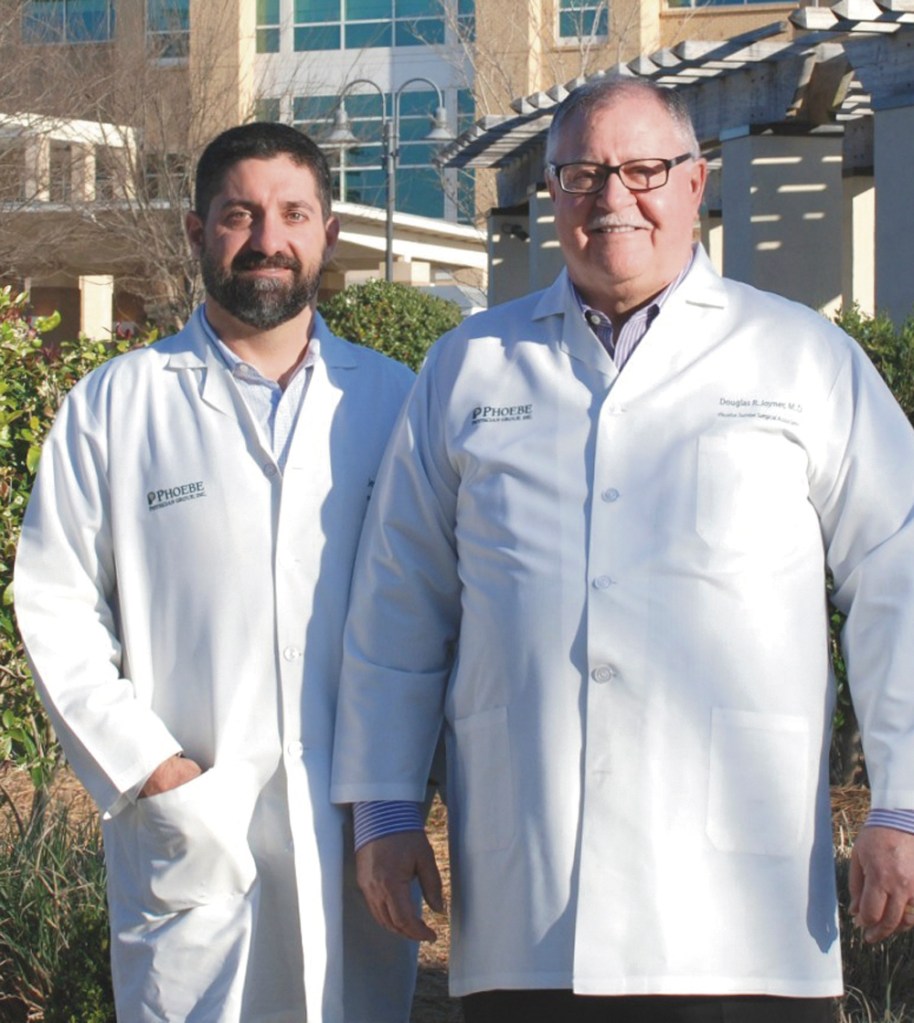 AMERICUS — Jeremy Joyner, MD, looked forward to practicing alongside his mentor as he traveled back to his hometown of Americus in 2009. It just so happens his mentor is also his father, fellow general surgeon Douglas Joyner, MD.
While both are now members of Phoebe Sumter Surgical Associates, it wasn’t always meant to be.
“I didn’t think I was going to be a doctor,” Jeremy. ”I remember telling my mom, ‘don’t be disappointed, but I’m not going to be a surgeon’.”
He changed his mind after earning his bachelor degree in biology from Taylor University in Upland, Indiana. He earned his doctorate in medicine and completed his internship and residency in general surgery at the Medical College of Georgia. He then completed his surgical fellowship in minimally invasive, endoscopic and bariatric surgery at Cuyuna Regional Medical Center in Crosby, Minnesota.
“I would have been proud of whatever he decided to pursue,” Douglas said. “But it was a real joy when he chose to follow in my footsteps.”
Douglas Joyner graduated from medical school in 1977, and then completed his residency in general surgery at Brook Army Medical Center in San Antonio, Texas. Following his decision to leave the Army, he moved to Americus, where he has been a surgeon since 1988.
“When you’re starting out on your own, it’s great having someone like my father, who is very accessible, supportive and encouraging,” Jeremy remembered.
Douglas Joyner is not only a mentor for his son, he also has helped mentor other young surgeons who joined the practice. However he says it goes both ways.
“I get as much back from working with my son and other young surgeons as I give,” Douglas said.  Techniques are always changing.  We learn from each other every day.”
The father and son duo are grateful for the unique opportunity to work together, and they believe their respect for each other’s opinion is a great benefit to patients.
“We work well together, and I am reminded daily what an experienced doctor he has become,” says the proud father.
Jeremy is equally proud of his father. “He cares deeply about his patients. I’m proud of the way he listens intently to them and eases their concerns.”
Every March 30, on Doctor’s Day, the physician duo is proud to celebrate their profession with countless primary and specialty care providers across South Georgia.