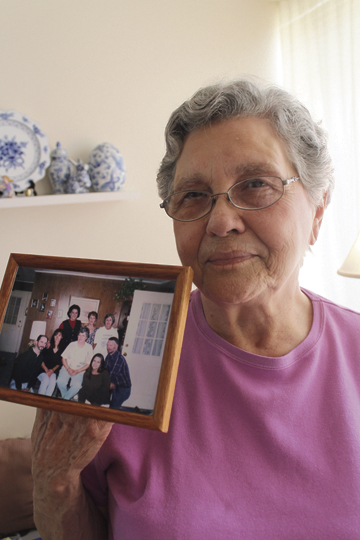 Ruby Jones, 82, lives in Magnolia Manor Garden Apartments and enjoys various activities with her friends and involvement in her church.

AMERICUS — On Mother’s Day we often think of the comforting arms around us as children, reassuring us in times of uncertainty that everything will work out. However, for Ruby Jones, 82, of Americus, she remembers her father, Edgar Mercer, assuring and comforting her and her siblings.
“I can remember it was during the Depression. I remember sitting in front of the fireplace and Daddy placing some sweet potatoes under some hot ashes for us to eat,” she said of her memories of growing up in rural Sumter County.
“My Daddy was a dirt farmer,” she said, and he took good care of them, making sure they had their essential needs.
“My mother Essie was there, but I remember my father more,” she said.
Jones grew up in the Chambliss Community, a small area just off Middle River Road. She said she remembers the old Chambliss four-room school she attended with her siblings.
Jones said she grew up in a time when mothers didn’t leave their children with just anyone.
“You didn’t take them off for someone else to keep,” she said, explaining that things were a lot different during her time. “You took your children wherever you would go,” Jones said.
Jones grew up during a time when mothers used cloth diapers and their babies were breast-fed or given what they called “sweet milk” in their bottles.
“Things were a lot different than today’s time,” she said
Jones had four daughters, Linda, Bobbie, Cindy, Bonnie, and two sons, Phillip and Darrell.
Jones said she had the daughters first, and then she reflected on the birth of her first son, Phillip David.
“Doctor Finn was out of town and Doctor Simpson was taking his calls, but he was attending an Albany football game,” Jones said,  describing the night in the operating room. “They showed me the baby and it was a boy. Then they took me from the operating room to my hospital room,” she said, adding that she was very tired after delivering the baby.
“They told me they were going to clean the baby up and bring him to the room. They brought the baby into the room and said, ‘She is such a beautiful little girl,’ she recalls with a smile. “I told them, ‘That is not my baby; I had a boy!” Then she drifted off to sleep.
Jones said the next morning she awoke to someone pulling on her toes.
“I awakened and Dr. Finn was just a pulling on my toes,” she said laughing. He said, ‘Ruby you couldn’t wait for me. But, you finally did it! You finally had a boy!’” she said, explaining she thought they had been playing a trick on her.
“I argued with Doctor Finn telling him, ‘no, they brought a girl in here last night.’ Then, Dr. Finn said, ‘Well, this one had a water spigot.’”
She said the doctor had the nurses bring the baby in to her.
“I was real proud to have a boy and the girls were tickled to death they had a brother. Then I had my second son, Darrell,” Jones said,  adding both boys did not have to want for anything.
“Every time they wanted something, all they had to do was grunt and the girls would get whatever they wanted for them. They never had to talk,” she said with a laugh.
Jones said a year and half after the second son was born, her husband, Phillip Thomas Storey, was killed in a tragic car accident.  Jones was left to raise the children on her own.
“I remarried Jasper Jones two years later and we had a daughter, Christi,” she said.
She feels she has carried out her life as a mother the best she knew how, learning many things along the way.
“There is no perfect mother,” she said, explaining that being a mother, for most, is a natural instinct.
“I tried to teach my children right from wrong. I tried to keep them at home and out of trouble and I made sure they attended church and Sunday school,” she said proudly.
“I feel like I did the best I could with what I knew at the time. I have made mistakes along the way. But, I have learned from my mistakes,” she said, adding, “I had some good kids. I made sure they got their education and a good job.”
Jones said she was looking forward to her children’s visits for Mother’s Day.
Jones said she has also been blessed with 13 grandchildren and 11 great-grandchildren.
When asked what she remembers most about being a mother, she said, “It’s been a lot of praying along the way. Lots of prayers.”
When asked how she would spend this Mother’s Day, she said, “It is all about being together on Mother’s Day, spending time together is what counts.” She said she will be attending her church, Pleasant Grove Baptist, where she has been a member for 40 years. “Then we will enjoy lunch afterwards,” she said with a grin.