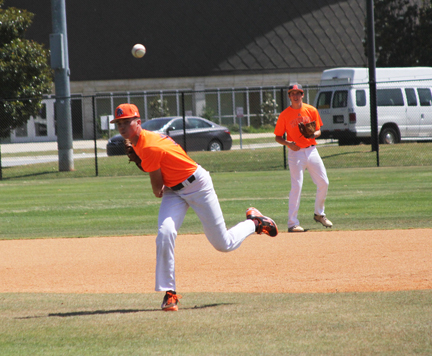 Michael Murray/Americus Times-Recorder: The Americus Travelers’ left-handed pitcher, Gavin Paul, warms up as the Travelers train in preparation for the beginning of the season on May 15 at Hurricane Field in Americus. Paul struck out six batters in the Travelers’ tournament closer against the Central Alabama Indians.

MONTGOMERY, AL – The Americus Travelers 16U baseball team kicked off their 2016 season on May 21-22, traveling to Montgomery, AL to participate in the Capital City Classic.
The Travelers got a strong start in the tournament, rolling over the Alabama Huskies of Helena, AL., for an 8-6 victory.
The Travelers then took the diamond to face the Triton Rays, of Montgomery for their next two contests of the tournament. Despite amassing an early lead in each of these match-ups, the Travelers dropped a pair of decisions to the home team.
The Travelers made up ground, however, in their final tilt of the weekend, shutting out the Central Alabama Indians by a margin of 6-0.
The tournament started off with a bang for the Travelers. After giving up a slight one-run lead to the Huskies in the initial frame of the first game, the Americus team made their move in the top of the third, plating a pair of runners of their own.
Not to be outdone, the Huskies added two more runs in the bottom of the fourth to take a 3-2 lead.
The Travelers exploded in the fifth inning, tacking on six runs, which would prove to be more than enough to cinch the victory after they held their opponents to only three runs in the bottom of the stanza.
Tyler Ross (of Lee County), Chance Holloman (of Schley County), and Will Kelley (of Bainbridge) split duties on the mound for the Travelers. Ross contributed two strike outs to the victory while Kelley added one.
Kelley and Camron Vanlerberghe (of Schley County) led the Travelers from the plate, each connecting on two hits in the match. Kelley and Will Lanneau (of Crisp County) each contributed a pair of RBIs.
In total, he Travelers collected 11 hits in the game.
In their second match-up of the tournament, the Travelers grabbed an early 3-2 lead in the first inning against the Triton Rays. Both teams added another in the fourth stanza to leave the Americus team up 4-3 until the sixth inning. 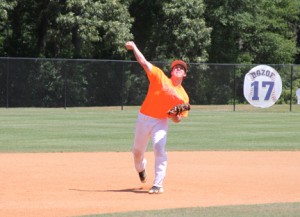 Michael Murray/Americus Times-Recorder:
The Travelers’ Will Lanneau launches the ball to the catcher while the team trains on May 15 at Hurricane Field on GSW campus in Americus. Lanneau brought in two RBIs in the Travelers’ opener against the Alabama Huskies on May 21 in Montgomery, AL.

In the eleventh hour, the Rays sparked a rally that netted the team two runs, sentencing the Travelers to a narrow 5-4 loss.
Kelley dominated the hill for the Travelers, fanning nine batters in his five and one third innings of work on the mound.
Kelley also brought in one RBI on his sole hit of the match. Jarrett Kemp (of Sherwood Christian) contributed a hit for the Travelers as well.
The following morning, the Travelers dusted themselves off and returned to the field for a rematch against the Rays.
Once again, the Travelers established an early lead over the Rays, plating one batter in the bottom of the second frame and two more in the third.
Triton’s batters heated up in the top of the fourth frame, however, and sparked a six-run rally to put the game out of reach. Another two runs in the sixth inning for the Rays sentenced the Americus team to an 8-3 defeat.
Jacob Seymour (of Lee County) pitched three and two-thirds innings for the Travelers, striking out four batters. Holloman came in as relief to wrap up the game.
Kemp led the Travelers’ hitters, connecting on two.
As a team, the Travelers collected six hits.
The local team’s luck changed for the better in their final match of the tournament, as the Travelers took on the Central Alabama Indians.
The Travelers pushed across two runners in the second frame and held off their opponents for the remainder of the match. A sixth-inning rally for the Travelers expanded their lead to six runs as they drew nearer to the shut-out victory.
Gavin Paul (of Lee County) handled hurling duties for the team, striking out six batters. Kelley wrapped up the final inning.
Vanlerberghe set the pace for the team’s batters, bringing in three RBIs on a pair of connections. Will Lang (of Lee County) and Reid Ragsdale (of Schley County) each added RBIs.
Lanneau contributed a hit to the Travelers’ victory as well.
In total, the Travelers collected seven hits in the match.
The Americus Travelers are scheduled to head to Atlanta for the World Wooden Bat Perfect Game Tournament on May 28.