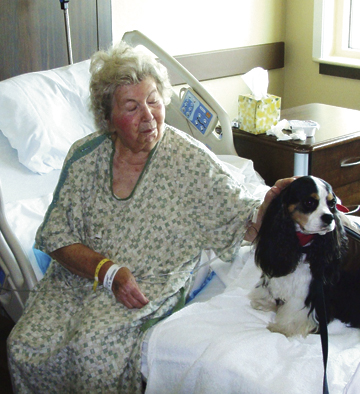 Pet therapy program at Phoebe Sumter brings smiles all around

AMERICUS — Phoebe Sumter Medical Center, at 126 U.S. Highway 280, welcomed visits from Paws Patrol Pet Partners on Wednesday as they carried out their bi-weekly pet therapy sessions.
The Pet Partners group is made up of volunteers who are trained by professional dog handlers to work with the public. It is a national organization.
As five local team volunteers and their five pets gathered just inside the entrance of the medical center, Jim McCleary introduced his Collie, Campbell; Becky McCleary and her Collie, Colin; Karen Hanna and her Labradoodle, Bailee; Virginia Gray and her Cavalier King Charles Spaniel, Dewar; and Paula Patterson and her Portuguese Water Dog, Abbie.
The origins of Paws Patrol started from a visit to the Albany Humane Society by newcomer Marty Harris, where she adopted Hero, a young yellow Labrador. Harris went on to form a group of like-minded friends who began visiting nursing homes, hospitals, Easter Seals, the Albany Youth Detention Center and various facilities which invited them and their pets to join in animal-assisted therapy.
According to Pet Partners’ website, in 2000, Paws Patrol became an affiliate of Delta Society (now Pet Partners) in regard to liability, support and international accreditation. Then, Harris and other volunteers went on to work diligently with the Albany Youth Detention Center. With the work of Pet Partners, Hero was named 2004 Hero Dog of the Year by the Georgia Veterinary Medical Association. Through “Project Hero,” young people in the detention center had the opportunity to care for, train and socialize homeless pets from a nearby animal shelter. Through the program, the dogs became better candidates for adoption, and the teenagers learned to be more compassionate individuals. Harris died from brain cancer in 2014. Her last wishes were for the organization to continue to create public awareness of the healing bond between humans and animals.
“We are so excited to have the Pet Partners visit us,” said Phoebe Sumter Nurse Manager of Medical Surgery, Stacey ZwierKo, as she described a recent pet therapy visit.
“We had a patient who was not talking,” she said, describing a non-verbal male patient who was melancholy before a visit was made by a volunteer and a Collie named Buddy.
“It just lifted him up. It turned his day around,” ZwierKo said, adding that the patient was hesitate at first, then the collie walked up to the patient, nudged him with his wet snout, and it was then the patient started petting the dog.
ZwierKo and McCleary agreed that the patient made a 180-degree turn from down in the dumps to petting the dog and on to revealing that he had a collie as a pet when he was a child.
The Pet Partners were not only making patients ignite with bright smiles and shout out heavenly hellos, the corridors of the hospital seemed to light up with the same effect, as employees, visitors  physicians arriving for work all stopping to welcome the handlers and their pets with delight.
According to McCleary, a regional trainer since 1970, volunteer and dog handler since his service in Vietnam as a U.S. Marine, said the Pet Partners visits not only various hospitals, but also nursing homes, Easter Seals, adult health care facilities, hospice and libraries. He went on to share a memory of a visit to one of the local libraries.
“We have a reading program in which the child reads to the dogs,” he said, describing a library visit in which a child said, “That dog does not listen to me.” McCleary told the child, “Watch his ears.” Then, the child continued to read and the dogs ears stood up. The child responded excitedly, “He is listening to me!”
As the volunteers, with their pets, made their way to the elevator in route to third surgical, patients were found waiting in their rooms. The patients welcome them eagerly. The pets approached them with the same eagerness, steadily well-behaved, soaking up as much attention as the patient would give.
There were others who seemed to benefit through the positive connections of the pet therapy animals and their partners.
Inez Colier, a patient from Americus, was waiting patiently, as the dog handlers and their dogs entered the room. Collier’s eyes lit up as she said, “Hey, there,” rubbing up Campbell’s head and then Abbie trotted over to her bedside to be paid attention to before leaving her room.
Another patient, who requested a visit, Letelia Perry, originally from Dothan, Alabama, who presently resides in Americus, was found petting up the top of Dewar’s head, while smiling, as Dewar just lay there, well-behaved, sitting at Perry’s side taking in the attention he was receiving, as his tail wagged back and forth with excitement.
According to the handlers, the pets enjoy the patients as much as the patients enjoy the pets.
“There is a connection which no one can explain,” said Phoebe Sumter Director of Community Relations and Customer Service,  Marcus Johnson, referring to the surprising ways the patients respond to the pets and the pets respond to the patients.
Another patient, Thomas Jenkins, was in the emergency room waiting to be transported when heard the pets were visiting and requested a visit. The Pet Partners eagerly attended to his request. Jenkins welcomed them with open arms and a smile, petting the dogs before being rolled out the door to his destination.
Another patient, Mattie Mason, found on third surgical, was waiting for her requested visit from the pets. She was left with a smile and memories of growing up with her pets. 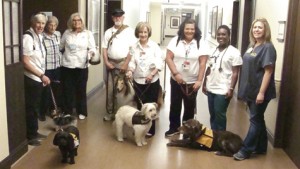 Master Scheduler Linda Prisant said Pet Partners are in need of recruitments in Americus.
“We are presently seeking recruitments in Americus. Anyone with questions can go to our website @ Pawspatrol.com or call 260-409-0169,” she said, explaining that volunteers would need a brief training and passing a “Trainer Ready,”  22-part evaluation and the completion of proper paperwork to gain entry into the organization.

By MICHAEL MURRAY michael.murray@ americustimesrecorder.com AMERICUS — A group of volunteers from the Alpharetta Presbyterian Church, who recently came to... read more