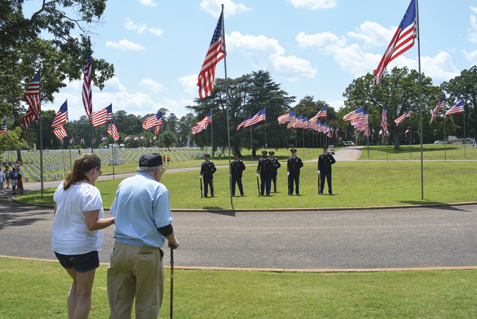 Veterans and other visitors watch as the Georgia State Honor Guard prepare to offer a rifle salute.

Honoring those who gave all

ANDERSONVILLE  — America’s military past and present were saluted with tributes of gratitude and poignant wartime stories of courage during the annual Memorial Day program at Andersonville National Cemetery Sunday afternoon.
The historic site was enveloped in a mixture of red, white and blue, a fitting background for the stirring service that opened with the advancement of Colors by the Georgia State honor guard followed by a solemn benediction led by the Rev. Jeff Wallace, pastor of Calvary Episcopal Church, Americus.
There were powerful messages of bravery and courage in service to God and country; patriotic music played by the U.S. Army Band from Fort Benning; the solemn laying of wreaths; a 21-gun salute, and the moving refrains of “Taps” played by a lone bugler.
A warm, gentle spring breeze unfurled the thousands of American flags — large and small — as master of ceremonies, Charles Sellers, NHS park superintendent, extended a warm welcome to the crowd of more than 300. They had come to pay tribute and to celebrate the military men and women that serve today and have served, especially those that lost their lives to defend our freedoms.
Sellers pointed out the national cemetery is the final resting place of the more than 21,000 buried there, including the 13,000 that perished while held prisoner during the Civil War.
“May we never forget them — the name on every tombstone has a story,” said Sellers, relating the poignant account behind the tombstone of a young soldier named Jim Williams who was killed in Vietnam 50 years ago. When the coffin containing his body was returned to his hometown in Alabama, he wasn’t allowed a proper grave site or burial at the cemetery in the racially divided town.
“His mother protested, but she found justice and peace when her son was laid to rest and buried here on Memorial Day 1966,” pointed out Sellers. 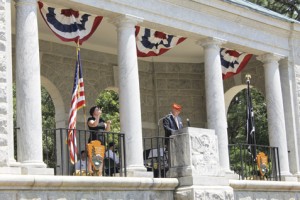 Featured speaker, Lt. Col. Kent Morrison USMC (ret.), a native of Americus and the current executive director of the Marine Corps Logistics Base, Albany, paid tribute to all military personnel, especially those who paid the ultimate sacrifice of giving their lives to protect the freedom of our country.
“When I think of sacrifices and what Memorial Day means to me as a U.S. Marine is the World War II battle of Iwo Jima, an island in the South Pacific, during the early months of 1945, where more than 6,000 Marines were killed,” said Morrison. “It was the only battle in the history of our Corps where we suffered more casualties than our enemy — we were victorious, but at a ghastly cost.”
“Those we recognize today believed in selflessness, and no better example can be given than the story of a young Marine, PFC Ralph Johnson, who was born in 1949. As a young African American, I am sure he faced many struggles growing up during this time in the history of our country.
“He was on a reconnaissance patrol in 1968, in Vietnam, and attacked by the enemy,” related Morrison, an Americus High School and Georgia Southwestern College graduate. “He was in a foxhole with two other Marines; a grenade landed in the hole. He picked up that grenade and pulled it to his chest and turned his body away from his fellow Marines. He died that night and his buddies lived. PFC Ralph Johnson believed in the motto ‘not for self but for country.’ ”
The other speakers — Edward L. DeMent, the national commander of American Ex-Prisoners of War; Jim Covington, Friends of Andersonville; and U.S. Second District Congressman Sanford Bishop, (D-Ga.) of Albany — each reflected on the meaning and significance of Memorial Day as well as emphasized the importance of educating today’s youth on the history of our country.
“Memorial Day and the history it evokes provide an opportunity for all of us to consider the true cause of our nation’s greatness, a national spirit that infuses so many with the will to give what Abraham Lincoln called the last measure of devotion to defend a cause and a belief larger than oneself,” said Morrison. 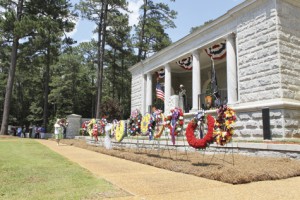 The program concluded with the laying of wreaths decorated in traditional patriotic colors presented by representatives of local and area civic and service organizations. Among those from Sumter County were the Friends of Andersonville represented by Melanie Grace; John D. Mathis American Legion Post 2, represented by Doug Dinsmore, commander, and Mitchell Green, past commander; and Council of Safety Chapter, Daughters of the American Revolution represented by Nancy Hayes, regent, and Gay Sheppard.

Pet therapy program at Phoebe Sumter brings smiles all around