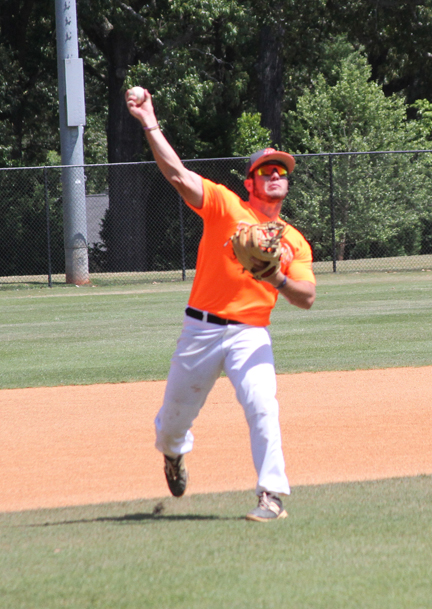 Michael Murray/Americus Times-Recorder: The Americus Travelers’ Will Kelley trains before the beginning of the team’s 2016 season. Kelley contributed a par of RBIs to the Travelers’ victory over Team Phenom in their first match of the tournament.

EMERSON, Ga. – The Americus Travelers 16U Baseball Club took the opportunity over Memorial Day weekend to travel to Emerson, Ga. and participate in the World Wood Bat Perfect Game Tournament.
With some very talented teams coming from all corners of the Southeast for the tournament, the Travelers went into the tourney knowing that they would face some very stiff competition as many of the best players in the region would be participating.
The Americus team kicked off the tournament with a bang, taking down Team Phenom, who had traveled from Florida, by a margin of 8-6. The Travelers put up hefty fights in the team’s three remaining matches of the weekend, but would not manage to come out on top in another decision. The Americus crew suffered losses to the Carolina Rebels (of North Carolina), the Georgia Jackets, and Team Elite West (of Georgia).
The Travelers rocketed to an early lead in their initial contest of the series against Team Phenom, plating a pair of runners in the first inning. The Florida crew stepped up in the third inning, stubbornly pushing across three runs in the top of the frame to snatch the lead back.
Not to be outdone, the Travelers added another five runs to their tally in the bottom of the fourth, taking a lead that they would carefully guard throughout the rest of the game.
In the top of the fifth, Team Phenom attempted to stage a comeback, bringing in two runners, but the Travelers’ tough defense put a halt to their progress before any more damage could be done. The South Georgia crew added an insurance run in the bottom of the inning and eventually walked off with a comfortable two-point victory.
The Travelers’ Will Kelly, of Bainbridge, and Jarret Kemp, of Albany, set the pace for the Travelers in their runaway victory, connecting on two hits apiece. Kelley and Kemp each contributed a pair of RBIs to the win as well.
Chance Holloman, of Ellaville, and Gavin Paul, of Lee County, split duties on the hill for the Travelers, with Paul striking out five opponents and Holloman fanning two. Will Lanneau, of Crisp County, tossed the final inning.
In total, the Travelers collected 10 hits in the win while holding their opponents to only six.
The Travelers then went on to face the Carolina Rebels, succumbing to a third-inning rally on the part of their foes.
Though the Travelers scored first in the top of the fourth inning, the Rebels would not let them celebrate for long as they plated three runners in the bottom of the stanza and another in the fifth to cap off their total.
A hard defensive push from the Rebels kept the Travelers from crossing the plate again until the final frame, when they scored their second run.
Kemp, again, led the Travelers from the plate, accompanied by Paul. Each batter contributed two hits. Holloman contributed an RBI to the Travelers’ cause in the match.
Lanneau, Tyler Ross (of Lee County), and Will Lang (of Lee County) shared time on the mound, with Lang striking out three batters.
The next afternoon, the Travelers returned to the diamond to take on Georgia Jackets National, taking a 6-2 loss in a tough contest.
The Americus squad scored first in the match, tossing one run on the board in the initial stanza. The Jackets broke the seal on their scoring in the second frame with one run and proceeded to tack on another four over the next two innings. The Travelers tied the score 2-2 in the top of the fourth, but would not see the opportunity to score again in the match.
Kemp connected on two hits in the contest.
Kelley pitched five innings for the Travelers before ceding the mound to Paul, who struck out two batters. Both teams collected 10 hits in the match.
In their final contest of the tourney, the Travelers faced Team Elite West (TEW), who took a narrow 5-4 victory.
TEW came out swinging when the action commenced, scoring three runs in the first stanza. When the Travelers returned to the dugout, they proceeded to tack on a pair of their own.
TEW added another run in the third inning to take a two-point lead, which the Travelers equalized with runs in the third and fifth frames.
With the teams tied as they headed into the sixth, TEW added another run and stubbornly guarded their lead until the game’s conclusion.
Kelley and Kemp each hit two to lead the Travelers, with Kelley bringing in two runners.
Paul threw six innings in the contest, eventually relinquishing the mound to Holloman who came in as relief. Paul dominated the hill in the match, throwing seven strike-outs.
On June 3, the Travelers returned to action, traveling to Troy University in Troy, AL for the Post 70 Invitational. The results of Friday’s match were not available at press time.

From the Archives: Taking a journey through the AHS Pantherettes’ historic 1966 basketball season