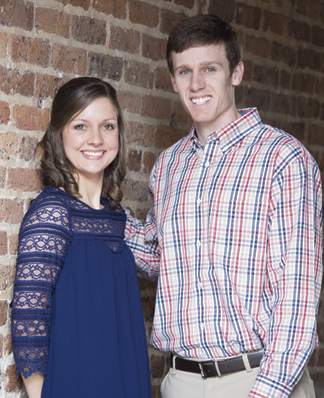 Keith and Kim Harrell of Cairo, Georgia, announce the engagement of their daughter, Kaylee Melissa Harrell, to John Andrew Alford of Tallahassee, Florida, son of Darren and Jenny Alford of Ellaville, Georgia.
The bride-elect is the granddaughter of Jerry and Beth Thompson and of the late John Daniel and Alma Harrell of Cairo, Georgia.
She graduated from Cairo High School in 2011, and will graduate from Valdosta State University in December 2016, with her master’s in education in communication disorders. She will then pursue a career as a speech language pathologist.
The future groom is the grandson of John and Connie Linneman and Emily Todd and the late John Alford, all of Americus, Georgia.
He is a 2010 graduate of Americus-Sumter High School and received a bachelor’s of science in mathematics from Georgia Southwestern State University and a bachelor’s of science in civil engineering from the Georgia Institute of Technology in December 2015. He is employed with FIGG Bridge Engineers in Tallahassee, Florida.
The couple will be married at 6 p.m. on July 30, 2016, at First Baptist Church in Cairo, Georgia.