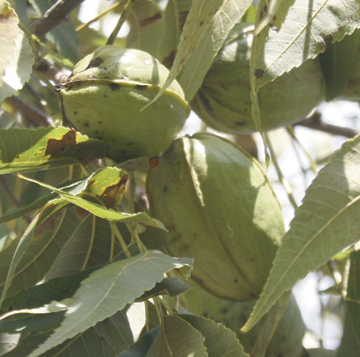 Pecans in a tree on the UGA Ponder Farm in Tifton in this file photo.

TIFTON — Seeing Georgia pecan trees covered in blooms this spring has University of Georgia Cooperative Extension pecan specialist Lenny Wells encouraged about this year’s crop.
Although harvest time is still five months away, Wells and Georgia farmers are assessing what pecan season will look like by the appearance and number of female flower blooms.
“To produce fruit, the main thing that you’ve got to have is those female flowers. If you look at those trees early on and you’re not seeing those female flowers on there, then you’re definitely not going to have any nuts,” Wells said. “If you see the female flowers early in the season, you at least have the potential for them to develop into a good crop.”
Looking at pecan trees a few weeks ago, Wells saw plenty of blooms opening among the 140,000-plus acres devoted to pecans in Georgia, but not all of these flowers will develop into nuts.
“At that time, a lot of those flowers looked kind of weak, and a lot of times those weak flowers will end up dropping off. We have seen some of that, but overall I still think we’re looking at a decent crop,” he said. “I don’t think it’s going to be a record crop or anything, but I do think we have the potential for a pretty good crop.”
Wells added that ‘Desirable’ pecans have a heavy bloom of female flowers already, but will likely drop between 40 to 60 percent of blooms in June. This is what growers of the “Desirable” variety expect every year, but it’s also why it’s an in-demand variety.
“Desirables”  are consistent because they do not bear an extremely heavy crop from one year to the next, said Wells. The number of flower blooms this season’s “Desirables” are able to maintain remains to be seen, and is the deciding factor as to whether Georgia’s most popular variety will produce a bumper crop.
Considering all of the challenges that Georgia pecan growers can face during the summer months, it’s still too early to estimate this year’s crop in yields, according to Wells. The pecan trees need good pollination, and have to overcome pecan scab disease, which is very prevalent among Georgia’s most productive varieties. The trees must also fend off any late season insect problems, especially ‘Desirables.’
“Certainly, disease is going to be an issue. Scab is already a problem in southwest Georgia, where pecan acreage is widespread. Farmers are already seeing some scab on ‘Desirable’ varieties. That’s going to be a battle, but it’s a battle every year,” Wells said. “The more rain we receive this summer, though, the more intense that battle becomes.”
According to the UGA Center for Agribusiness and Economic Development, pecans generated $313.3 million in farm gate value in 2014. Georgians can be tentatively optimistic about a similar performance this year.
“The foundation for a good crop is there,” Wells said. “When you’re looking at a tree and see more than about 60 or 70 percent of your terminal branches with flowers on them, that’s a sign you’ve got a good crop.”