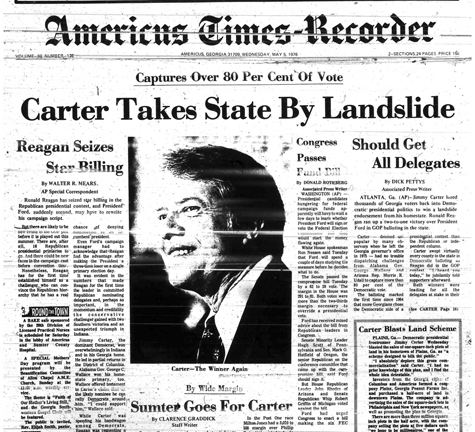 1976: Primary ups and downs, yet Carter remains on course

May was by far the busiest month during the 1976 Democratic presidential nomination contest. In all, there were 16 primaries. Jimmy Carter was the frontrunner and, if he could run the table, he had the opportunity to become the party’s presumptive nominee. His remaining opponents were Arizona representative Morris Udall, Alabama governor George Wallace, California governor Jerry Brown, and Idaho senator Frank Church. May, however, turned out to be a month of ups and downs for Carter. Not all Democrats were ready to fall in line behind the candidate from Plains, Ga.
In March, Carter won the first two southern primaries. He defeated Wallace in Florida and North Carolina. On May 1, Carter won another southern primary. He carried Texas with 48 percent. There, he defeated Texas senator Lloyd Bentsen, who ran as a “favorite-son” candidate and won 22 percent, and Wallace who earned 18 percent. Texas was Carter’s eighth primary win.
In its May 3 edition, the day before the May 4 Georgia primary, the Americus Times-Recorder encouraged voters to turn out and show their strong support for their fellow Georgian. The primary involved a preference vote for the candidates and a vote for pledged and alternate delegates. Locally, the Carter delegates on the ballot were Milton Jones, Janet Barker, and Glenn Robertson for pledged delegates and Maxine Reese and Betty Pope for alternates.
The following are excerpts from the editorial, “Let’s Show ’em Where Jimmy is From”:
“After months of watching other States express their preference among the presidential candidates, and seeing our own Jimmy Carter outdistance the field, we finally get a chance to show our support for his candidacy.
“A lot of people doubted that Jimmy or any Southerner could command so much attention and support in an effort of this kind. But the facts are, they like him and he is now an odds on favorite to become president this year. Recent polls say he would beat President Ford if the two were pitted against each other at this time.
“We really should be flattered because he is espousing for the most part the things which a majority of Southerners believe today. It seems we are not so much out of step with the rest of the nation after all.
“The interesting thing about the Carter candidacy is the broad appeal he seems to have among all groups and all walks of life.
“Maybe this is what Americans want most in a president. A man who admits he doesn’t have all the answers at once, but is willing to do his best to lead the nation to benefit all its citizens.
“I know many of you have been helping … with money, moral support and even in traveling far distances to campaign for him.
“Tomorrow is Georgia’s primary. We have a chance to show the nation that we are behind Jimmy … all the way.
“Let’s give him a vote (and his designated delegates, too) that will show the solid support he deserves from his home folks!”
With 83 percent, for his ninth primary win, Carter handily won the first-ever Georgia presidential primary. The May 5 headline for the Americus Times-Recorder was, “Carter Takes State By Landslide.” He won all 159 counties by large margins; he won 81 percent of the vote in Sumter County. Wallace polled only 11 percent statewide. After voting for her husband in Plains, Rosalynn Carter said, “It seemed awesome to pull the lever for my husband for president of the United States.”
Elsewhere, for primary win numbers 10 and 11, Carter won Indiana and the District of Columbia. He won Indiana decisively with 68 percent of the vote. Wallace was second with 15 percent. Carter also won D.C. with 32 percent over Walter Fauntroy, the District’s delegate to the U.S. Congress, who received 30 percent. Udall came in third with 21 percent. Wallace won the primary in his home state of Alabama. It was his first primary victory of 1976.
The following Tuesday, May 11, three states had primaries. Carter had one setback in Nebraska. It was a narrow loss to Idaho senator Frank Church, 38.4 percent to 37.6. The contest was the first for Church who entered the presidential primaries only in March. Responding to the loss, Carter said, “Well, I can’t win ‘em all.”
Also that day, a primary was held in West Virginia. However, Carter did not compete in the primary. Instead, he deferred to favorite son Robert Byrd who won with 89 percent. In the other primary, Connecticut, Carter was the projected winner, edging Udall 33 to 31 percent for his 12th primary victory. Though he had dropped from the race, Senator Henry Jackson received 18 percent.
A week later, Carter and Brown split the May 18 primaries in Michigan and Maryland. For his 13th win, Carter narrowly prevailed over Udall in Michigan, 43.4 to 43.1 percent. It was another big Midwestern victory for Carter. Brown won Maryland, 48 to 37 percent over Carter. The win was Brown’s first. Like Church, Brown became an active candidate only in March. Carter charged that both Church and Brown were not serious candidates for the presidency, but mere tools of “powerful political bosses” and “machine politicians” who wanted to prevent him from winning a first-ballot nomination at the Democratic National Convention in July. Despite the loss, Carter remained upbeat and confident. He was still winning delegates and inching closer to claiming majority support. 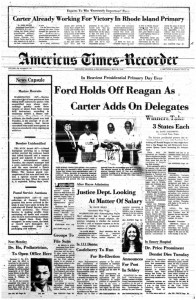 The month ended with six state primaries on May 25. The results were mixed for Carter. As expected, he ran strong in the South. He won Arkansas with 63 percent of the vote and, in Tennessee, he won with 78 percent. Wallace again was second with 17 percent in Arkansas and 11 percent in Tennessee. In Kentucky, Carter defeated Wallace, 59 – 17 percent, for his 16th primary win of the season.
Carter, however, was not successful in the three Western primaries. He lost to Senator Church in Idaho, 79 – 12 percent, and he lost to Governor Brown in Nevada, 53 – 23 percent. He then lost Oregon. Church was first with 34 percent, Carter with 27 percent, and Brown with 25 percent. Church believed that the results showed “people are taking a second look at Jimmy Carter.”
At the end of May 1976, Carter continued to be the Democratic Party frontrunner. To be sure, there were some primary defeats. But, nonetheless, Carter was still winning primaries and earning more delegates. For the month, he won nine primary contests: Texas, Georgia, Indiana, D.C., Connecticut, Michigan, Arkansas, Tennessee, and Kentucky. No other candidate came close to matching Carter.

One Sumter exceeds goal in contributions

By LEILA S. CASE www.americustimesrecorder.com AMERICUS — A grand total of $2.2 million will be used to improve Sumter County’s... read more