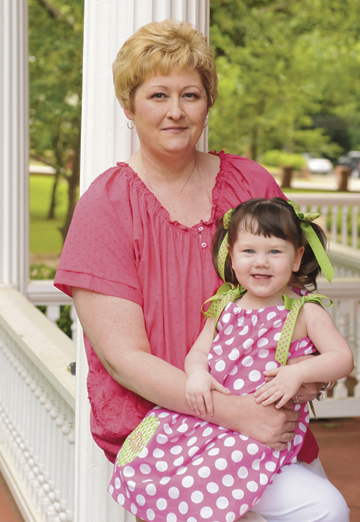 Lori Allison Inhulsen of Ellaville and her granddaughter, Lillie, who inspired her grandmother’s children’s book.

ELLAVILLE — Lori Allison Inhulsen of Ellaville is traveling a new road that she’s confident will be a great ride.
Inhulsen has taken varied pathways during her lifetime — some straight as arrows and others with twists and turns that went in many directions and provided countless experiences — some good and some not, but they all have happy endings.
A retired classroom teacher, cancer survivor, daughter, sister, mother and grandmother, Inhulsen has a new career as a children’s book author.
“I was totally surprised,” said Inhulsen. “Actually I was stunned when the publishing house accepted my manuscript.”
The children’s picture book, “Lillie’s First Sleepover,” will be released the first week in July. The story is about the first time her warmhearted, spirited granddaughter, Lillie Phillips, 3, spent the night at her house.
Inhulsen is known as Mimi to her grandchildren ranging in age from 11 to three months. They are in and out of her house on a regular basis except for Lillie who is with her weekdays while her mother and Inhulsen’s daughter, Melissa Phillips, works as a bookkeeper.
A graduate of Georgia Southwestern with the bachelor of science in education and specialty in teaching children with special needs, learning disabilities and behavioral disorders, Inhulsen was employed with the Flint Area Learning program 18 years. She taught in the classroom except for the final two years when she served as the parent-teacher coordinator.
“I loved my job and the students,” said Inhulsen, who had no thoughts of retiring until she was diagnosed with advanced metastatic breast cancer eight years ago. She spent the next year undergoing intense treatment — a combination of chemotherapy, radiation and surgery. A year later the disease went into remission and has remained in that state through chemotherapy maintenance every six weeks.
“The type of cancer I had and the intense treatment resulted in side effects that limited my teaching ability and I decided it would be best to take an early retirement,” said Inhulsen. Not one to be idle,  she stayed busy by helping with grandchildren, creative cooking, baking and elaborately decorating cakes, sketching and other artistic projects.
“I love creative work and doing crafts with my grandchildren,” said Inhulsen. Her granddaughter, Haley Phillips, 11, is a budding artist and participates in an art class in Americus.
“I am also a big believer in prayer — in fact my deep faith helps me remain positive,” she said. “When I was undergoing cancer treatment, I let God handle my problems.” She is a member of County Line United Methodist Church, Ellaville, where she is active in varied youth programs. She is a member of the Out of Darkness ministry, an outreach program to help rescue and restore human trafficking victims and educate the community on the issue.
Although Inhulsen stayed busy with varied activities, she continued to search for something significant that would be a legacy for her children and grandchildren, and she asked for God’s guidance and direction.
“During this time Lillie, then two, was napping at my house and suddenly I was inspired to write a book about her spending the night at my house,” said Inhulsen. While Lillie slept, Inhulsen wrote the story in long hand, completing it in just over two hours.
“I couldn’t believe it,” said Inhulsen. “I liked it and couldn’t wait to see if it would go anywhere. Using the Internet, I found Mascot Books while researching publishing companies that specialize in children’s books. I contacted them by email and submitted my story and I soon had a response. I was told the story had potential and within two weeks I had signed a contract.
“I was floored and almost in shock,” said Inhulsen. “My parents, W.B. and Marie James of Andersonville, and my sister, Karen Smith, were very encouraging and supportive. I took a leap of faith and signed the contract with Mascot Books. They have been fantastic and I have learned so much and I’m still learning.”
The publishers asked Inhulsen to divide the story into sections and also asked for her advice on the book illustrations. “They wanted my advice on everything in detail on every page, including the cat and dog and the colors of the leaves on the trees and flowers,” she said.
The story grows deeper.
Inhulsen’s book has resulted in a spin-off business, a  line of children’s clothes that she and Susan Ellis, owner of Sweet Peas and Magnolias, a cottage industry in Ellaville, are developing that was  inspired by the pink and white polka dot dress Lillie is shown wearing in the book.
Additionally, she is in the first stage of writing another book, the second in the series of Lillie books, featuring all her grandchildren who live nearby.
“I am overwhelmed with joy and happiness and most of all so grateful for all my many blessings,” said Inhulsen. “I am excited about the future — I have a lot of plans.”
“Lillie’s First Sleepover” ($14.95 hardback) will be available locally at Bittersweet, the coffee shop and bookstore located at 111 W.  Forsyth St., where a book signing will be held later this summer. It is also available online at Amazon.com; Books a Million; Barnes and Noble and Mascot Books.

JEKYLL ISLAND — The Georgia Press Association honored the winners of the 2016 Freedom of Information Award and the 2016... read more