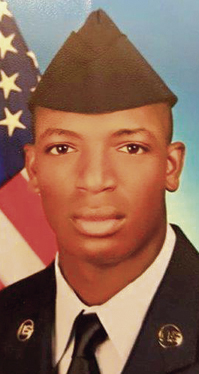 SAN ANTONIO, Texas — Air Force Airman 1st Class Devontat’e Darv’ay Monts graduated from basic military training on May 27 at Joint Base San Antonio-Lackland, San Antonio, Texas.
The Airman completed an intensive, eight-week program that included training in military discipline and studies, Air force core values, physical fitness, and basic warfare principles and skills. The challenge was both mental and physical but ultimately transformed A1C Monts into a confident Airman with the skills and confidence that he needs to excel as a member of the U.S. Air Force. The mission of the United States Air Force is to fly, fight and win in air, space and cyberspace. The Air Force rich history and vision guides the Airmen as he pursues the Air Force mission with excellence and integrity to become leaders, innovators and warriors. An Airmen who completes basic training earn four credits toward an Associate in Applied Science Degree through the Community College of the Air Force.
Monts is a 2014 graduate of Americus-Sumter High School of Americus. He graduated in 2015 from South Georgia Technical College in Americus in criminal justice. Prior to pursuing his Air Force career, Monts was employed with the Americus Office Georgia State Patrol as a Dispatcher 2.
Monts is the son of Tawanna T. Wright and Dometrius D. Monts, both of Americus, and the grandson of Robert and Joann Harrell of Cobb, Johnny and Carol Ball of Warner Robins, and the late Frank and Flora Monts. He has a brother, Dometrius D. Monts Jr.
He moved on June 6, 2016. to Tech School at Fort Lee, Virginia.