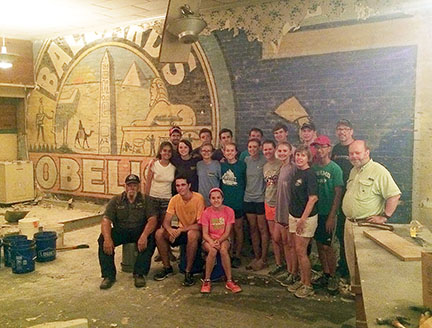 Michael Murray/Americus Times-Recorder: A group of volunteers from the Alpharetta Presbyterian Church recently helped uncover a mural which had gone undiscovered for decades in an historic downtown building.

AMERICUS — A group of volunteers from the Alpharetta Presbyterian Church, who recently came to Americus to aid in renovation efforts at the Americus-Sumter Fuller Center for Housing’s downtown Americus office, received a big surprise on Tuesday morning.
While working upstairs in the building, located on West Lamar Street, downtown, the group uncovered a Ballard Obelisk Flour Co. mural that has, presumably, not been seen in decades.
Kirk Lyman-Barner, board chairman of the Americus-Sumter Fuller Center for Housing, spoke with the Times-Recorder about the discovery soon after it was uncovered.
“This is [the volunteer group’s] second year coming here,” Lyman-Barner said. “They came to work on houses, but we’re also looking to turn this space into an apartment complex.
“They were having trouble peeling the wallpaper off and Mark [the team’s construction volunteer] suggested that they just hit it with the crowbar,” Lyman-Barner continued. “As the wallpaper was falling off, I could see that there was something behind it.”
As the group continued to peel back decades’ of layers of wallpaper, it soon became evident that they had discovered something unique and, surprisingly, well-preserved. 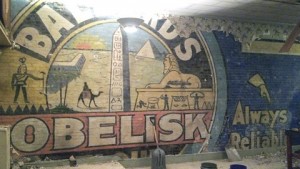 The mural originally served as an advertisement for the Ballard Obelisk Flour Co.

“It held up really well to all of the abuse and pounding that it took to tear off all of the wallpaper,” Lyman-Barner said. “The plaster, remarkably, stayed in really good shape.”
Lyman-Barner contacted Heather Stanley, managing director of the Rylander Theatre, asking her to come and take a look at the discovery, as the building next door to the Fuller Center’s downtown office was previously used as a movie theater. “[Stanley] discovered, on the Internet, that it is the Ballard’s Obelisk Flour Co. logo. So, we know what it is but, how it got here, we don’t know.”
An Internet search by the Times-Recorder found that the Ballard and Ballard Co., Inc. was established in 1880, which  remained in business until the company was purchased in 1950. Though the mural did not immediately appear to include any definitive markings indicating when it had been painted, a collection of advertisements from the company, which use similar imagery and composition, is currently housed in the Virginia Tech Library’s special collections. These artifacts are said to have been created around 1925.
Lyman-Barner went on to say that he plans to ensure that the mural is preserved.

Edit: Since the original publication of this article, research conducted by Lyman-Barner has revealed that the building that currently houses the Americus-Sumter Fuller Center for Housing’s downtown office was constructed in 1905 to house a General Store named “Hamilton and Company”.

The mural would have been originally painted before the construction of this building, meaning that it is much older than the Times-Recorder originally speculated.

As more of the wallpaper covering the Ballard Obelisk Flour Co. advertisement was removed, a separate mural, advertising books and stationary was revealed to the right of the originally discovered artwork.

A photo, found at http://www.sumtercountyhistory.com/photoalb/1907photos/Holliday’sStore’07.jpg, showed that the building, on the exterior of which the murals were originally painted, housed a business called “Holliday’s Bookstore” in the early 1900’s. The most recently discovered mural was likely an advertisement for this business.

In addition, Lyman-Barner also told the Times-Recorder that a similar mural, advertising the Ballard Obelisk Flour Co. discovered in Moultrie, Georgia in 2014.

AHS Class of ‘86 reunites for 30th, Day of Panther Service