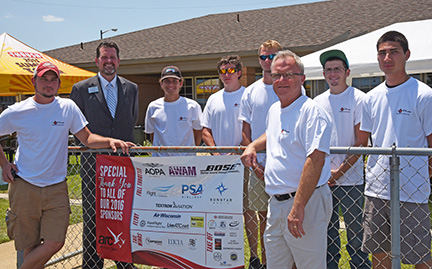 AMERICUS – Several members of the South Georgia Technical College (SGTC) Aviation Maintenance faculty and students volunteered to assist with the Air Race Classic (ARC) that was hosted by Souther Field Aviation in Americus on June 23-24. The event featured over 100 women pilots, ranging in age from 17 to 90 years old. The Air Race Classic is an annual Visual Flight Rules, all-women cross-country event flown during daylight hours.
This year marked the first time in the history of the Classic that Americus had been considered as a stop. Albany, Athens, Gainesville, Jekyll Island, Rome, and Waycross have each been featured in the past. This is the first time in six years that a Georgia site has been included.
This year also marks the 40th anniversary of the ARC. Each year the route changes.
“South Georgia Technical College is honored that our aviation maintenance faculty and students had the opportunity to volunteer to assist with this event,” said SGTC President, Dr. John Watford. “This may be a once in a life-time opportunity for these students to be able to assist with this kind of air race. It is a great learning experience for our students and it is an honor for South Georgia Tech to be associated with other great aviation colleges like Embry-Riddle, Midland College, Texas State Technical College, Henderson State University, the University of Central Missouri, Institute of Aviation at Parkland College, Middle Tennessee State University Department of Aerospace, and others.”
The Air Race began in Prescott, Arizona and continued through Albuquerque, New Mexico; Midland, TX; Waco, TX; Arkadelphia, AR; Warrensburg, MO; Champaign/Urbana, IL/Tuscola, IL; Murfreesboro, TN; Americus, GA; and ended at Daytona Beach, FL at Embry Riddle Aeronautical University’s Daytona Beach campus.
This year’s race stops were all chosen because they are near to or affiliated with schools with an aviation program. SGTC, in Americus, is Georgia’s oldest aviation school and its rich history makes it one of the oldest training facilities in the United States. Prior to being used as a college, the land on which SGTC now stands, was an Aviation Training Base during WWI and WWII known as Souther Field. Souther Field was renamed in 2009 and the airport is now known as the Jimmy Carter Regional Airport.
SGTC offers Aviation Maintenance Technology, Avionics Technology, and Aircraft Structural Technology programs. The programs last from four to six semesters.  SGTC is also a Federal Aviation Administration (FAA) approved training and testing site. All SGTC aviation students have the opportunity to take the FAA Airframe and Powerplant license exams upon graduation.