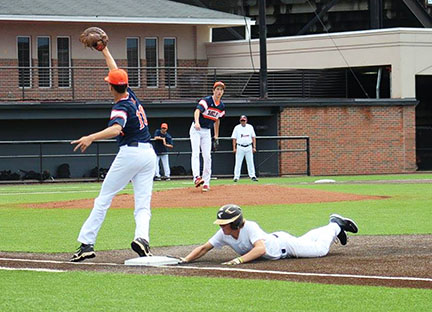 CUMMIMG – The Americus Travelers 16U Baseball Club recently hit the road, following a substantial break on the weekend of June 24-26, as the team traveled to Cumming to participate in the Triple Crown Summer Blowout, featuring 16 of the top teams in the Southeast.
The Travelers kicked off the tournament with a bang, tying their first game before rolling to five successive victories, earning themselves a spot in the tourney championship. The Travelers were dealt their only defeat of the weekend in their final match-up to leave with runner-up honors in the Gold Division of the tournament.
On their first trip to the diamond of the weekend, the Travelers fought their way to a 5-5 stalemate against the Chamblee-based Ninth-Inning Royals in a seven-inning contest.
The Travelers came out strong in the match, plating three runners in the initial frame, thanks in part to an RBI triple by Camron Vanlerberghe (of Schley County), another RBI hit by Will Kelley (of Bainbridge), and a fielder’s choice.
The Travelers added one more in the third stanza by the way of a wild pitch and ended up tying the score 5-5 in the fifth thanks to a passed ball that scored Reid Ragsdale (of Schley County).
The Ninth-Inning Royals managed to score one run in the first, third, and fourth innings before taking a brief lead in the fifth by plating two runners.
Jarrett Kemp (of Albany) paved the way for the Travelers, connecting on each of his two at-bats. Tyler Ross (of Lee County) and Kelley split duties on the mound, with Kelley contributing a pair of strike outs to the Travelers’ cause. 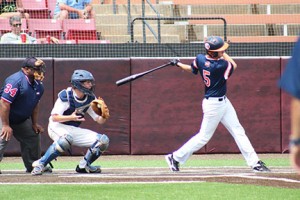 The following morning, the Travelers returned to action, taking on the GATA Wolfpack, based in Stockbridge.
Following a hard-fought up-and-down tilt, the Travelers eventually overcame the Wolfpack 12-9 at the game’s conclusion.
The Travelers grabbed an early 2-0 lead in the first inning when Gavin Paul (of Lee County) hit a double, bringing in Vanlerberghe. Paul later reached home plate on an RBI hit by Chance Hollomon (of Schley County).
The Wolfpack responded with a massive, five-run inning in the bottom of the frame, but the Travelers reversed their fortune in the top of the second, sparking a seven-run rally that gave them a lead that they would carefully guard throughout the remainder of the contest.
The Travelers tacked on additional runs in the fourth and fifth stanzas before the Wolfpack staged their comeback effort in the fifth, adding three more marks to the home the team’s tally. The Travelers clinched the victory in the sixth frame with an RBI double by Jarrod Wall (of Schley County) that brought in Ragsdale.
Ross set the pace for the Travelers in the match, collecting three hits and bringing in two RBIs. Holloman and Hall split time on the hill in the match, striking out five and three batters, respectively.
Later that afternoon, the Travelers returned to action, taking a 5-4 win over the PGB Bears, based in Alpharetta, thanks to a last-inning RBI by Wall.
The Americus-based crew got off to a slow start in the match, giving up four runs in the initial three innings before breaking their silence in the top of the fourth with an RBI off of Paul’s bat that plated Kelley. The Travelers put themselves back in contention in the top of the sixth, adding three more runs to equalize the gap, 4-4. In the top of the seventh, Wall’s late RBI put the Travelers over the top, solidifying the win.
Lang connected on three hits for the Travelers, bringing in two RBIs in the process. Kelley fell close behind with two hits in the match. Will Lanneau, of Crisp County, contributed an RBI as well.
Paul went the distance on the hill for the team, pitching all seven innings and fanning 11 batters.
The next morning, the Travelers continued in the tournament, earning a 9-5 win over the Bomb Squad, based in Gray, Ga.
After two uneventful stanzas, the Travelers broke the seal in the third, scoring a pair of runs which the Bomb Squad promptly responded to with three of their own.
The Travelers pulled back ahead in the fifth, with a two-run rally, sparked by an RBI hit by Lang that plated Kelley. In the top of the sixth, the Travelers put the game out of reach with a four-run scoring spree, kicked off by a Kemp hit that completed Ross’ round trip. A Kelley triple then brought home both Kemp and Vanlerberghe.
Kemp, Ross, and Paul each collected three hits in the match, as Kelley and Lang contributed three and two RBIs, respectively. Kelley handled hurling duties for the team over the initial five innings, sending three batters back to the dugout. Ross wrapped up the game from the hill, striking out one.
The Travelers rode this momentum into their next test of the afternoon, as the team took down the Georgia Bombers Gaines, of Johns Creek, Ga., 11-3.
Following a minor setback, when the Bombers pulled ahead by two runs in the second inning, the Travelers blasted off on a pair of five-run stanzas, solidifying their place at the top for the duration of the game.
In the third inning, the Travelers scored on a pair of doubles, a sacrifice fly by Wall, and a double-scoring triple by Vanlerberghe. In the following inning, the Travelers added five more on a double-scoring double by Kemp, RBI hits by Vanlerberghe and Gavin Paul, and an RBI double by Kelley.
The Travelers then tacked on another run in the fifth stanza for good measure.
Kemp set the pace for the team’s hitters, connecting on four of four and bringing in two RBIs. Kelley and Vanlerberghe collected three and two hits, respectively. Vanlerberghe added three RBIs while Kelley tacked on another pair.
In their final bout of the tournament, the Travelers took on the Georgia Bombers White, also based in Johns Creek, suffering their only defeat of the weekend in a 6-4 loss.
The Georgia Bombers pulled ahead early, crossing the plate five times in the first inning, and adding another run in the following frame.
The Travelers made the board in the third, plating two runners, and narrowed the gap in the seventh with an RBI double by Kemp and a two-scoring triple by Vanlerberghe.
Holloman contributed three hits to the Traveler cause in the contest, while Vanlerberghe and Lanneau followed close behind with two apiece. Kemp added two RBIs.
Kemp and Lanneau split time on the mound, with Kemp striking out three opponents.
The Travelers return to Americus for a Saturday-Sunday double-header as part of the Travelers Weekend Challenge on July 9-10. They’ll end their summer season on July 24-30 at the Grand Slam World Series in Panama City Beach, Fla.

In 2012, the Georgia Department of Transportation adopted a statewide “Complete Streets” policy. But what are “complete streets?” The best... read more