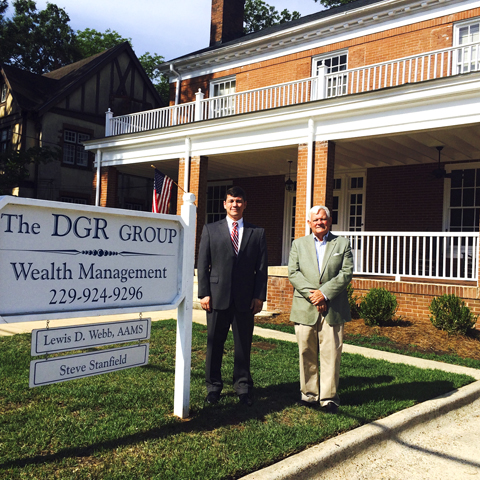 AMERICUS — Americus businessmen Steve Stanfield and Lewis Webb are doing their part to improve and preserve property in Americus’ historic district.
The men, partners in The DGR Group Inc., a wealth management business, recently completed an extensive renovation of a 98-year-old house at 205 S. Lee St., relocating their offices there earlier this month after having purchased the property in January. Stanfield considers the location the “gateway” to the city’s historic district.
“We have always had an appreciation of the historical significance of our town and it’s important to us to renew this structure for future use,” said Stanfield. “We’re excited to be among the other businesses and homeowners along South Lee Street making property improvements.”
Stanfield and Webb, licensed stockbrokers and investment partners, began working together in 2004, and formed The DGR Group in 2008. “We’ve built a good relationship with our clients over the past eight years and at this point we saw an opportunity to expand our business and give back to the community,” said Webb.
Through its almost 100-year history, the two-story brick, 4,000 square-foot structure has undergone many changes from its original purpose as a single family residence built by the late Barlow Council, a member of a prominent local family, in 1918 toward the end of World War I. The dominant architectural style is Colonial Revival, a popular movement in the early 20th century inspired by the Georgian and Federal designs of the Colonial period of the 18th and 19th centuries.
Stanfield said the house served as a boarding house at some point but it morphed once again when the late Dr. Schley Gatewood Sr. purchased the property in the 1940s for his medical practice of obstetrics and gynecology. Other local physicians specializing in child care and pediatrics once had offices there as well. Gatewood was later joined in practice by his son, Dr. Schley Gatewood Jr., who retired a few years ago, and the building stood vacant until purchased by the present owners.
Stanfield pointed out that Gatewood Sr. fortunately had the foresight to seek the advice of the original architect before any alterations in the floor plan were made to create office spaces and examination rooms for his practice.
“He apparently didn’t want the integrity of the original architectural style destroyed,” said Stanfield. “They were careful how changes in the floor plan were made so they could be reversed in the future if the need occurred,” he said.
As walls and petitions were removed during the recent renovation, the original architectural features were revealed for the first time in decades.
Today, the interior spaces have a nice feel throughout.
Stanfield and Webb returned the building to its original foot print — spacious, open rooms featuring 11-foot ceilings, beautiful molding throughout, handsome molded plaster fireplace mantles, and large windows that provide abundant natural light to the downstairs and upstairs rooms.
The front door opens into a large reception room tastefully furnished with traditional furniture. Stanfield’s office is immediately to the right and was once the parlor when the house was a single-family dwelling. Webb’s office, the original dining room, features judge’s paneling below the wainscoting and opens into what once was the former sunroom. The space was partitioned to create a file room and fully accessible bath. The upstairs has three rooms that will be used for future expansion and an enclosed windowed porch.
“We’re excited we could restore the building to its original footprint and floor plan,” said Stanfield, pointing out they believe in the importance of restoration and reuse.