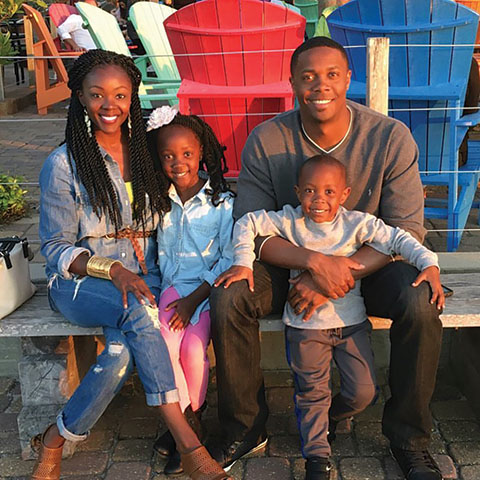 Porscha Turner and her family.

AMERICUS — Talking frankly about her daughter’s conscious decision to seek alternative treatment for cancer wasn’t easy at first for Angela Jackson Engram of Americus.
“I told her she would have to take radiation or chemotherapy,” said Engram, describing her state of mind once her daughter, Porsha Turner, 27, was diagnosed with stage IV breast cancer and was refusing to take treatments which would have a negative impact on her quality of life with her children.
Engram said it has been three years since her daughter’s first diagnosis. Turner now lives in Atlanta.
“By looking at her one could never tell she has cancer,” she said, explaining that her daughter had researched  every method of treatment there was to battle cancer.
“When she was first diagnosed, she was pregnant with Caleb, and Aubrey was three,” Ingram said, describing her daughter’s wishes to refuse chemo and its negative effects for the sake of living a more quality life for her kids.
“She want to be there for her children,” she said. Turner didn’t want to be a sick mommy all the time and the fact that chemo and radiation can have some damaging, negative effects on the body.
Since Turner’s first diagnosis in 2013, she has been battling her cancer by alternative means. However, just weeks ago she found her cancer had metastasized, spreading from one organ to another. It was then the decision to seek alternative treatment in Mexico was implemented. Ingram said an account was set up on Facebook for funding and within a two-day period, funds for her daughter’s treatments were raised.
“We raised $56,000,” she said gratefully. Turner will be leaving for her 28-day treatments on Sunday.
“We want to thank everyone who donated,” Ingram said, adding she was also grateful for everyone who was also instrumental in the funding process.
Ingram’s funding page, porchaturner@facebook.com, thanks her creator.
“First, allow me to say thank God, thank God, thank God. Thanks to each of you for whatever you have sown into my child’s life and our family; your hard earned money, prayers, kinds words, all of the phone calls and texts. You all have rallied around my family and the good that came pouring out has been a beautiful thing. I am reminded that there is a a lot of good still in the world.”