Argument between women lands both in jail

COBB — An altercation between two young women at a weekend gathering ended with both in jail.
According to the reports obtained from the Sumter County Sheriff’s Office, the law was notified about 6:30 p.m. Saturday, July 2 to a report of a domestic disturbance with shots fired in the area of Tommy Warren and Phil Jones drives in the Lake Blackshear area.
The responding deputy found two females walking on Phil Jones Drive, Rebecca Hancock, 32, of Leslie, and another young woman. 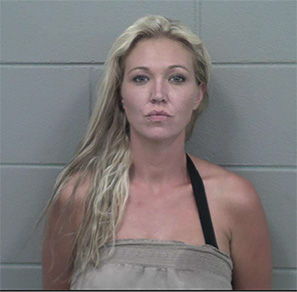 According to the report, Hancock told the deputy that a drunk woman had fired a gun in her direction during a verbal argument between the two. That woman was identified as Kolbee Taylor, 24, of 119 Tommy Warren Drive, Cobb. The deputy drove the two women to the Tommy Warren Drive address. Upon arrival, a vehicle was leaving the residence. The vehicle stopped and a woman stepped out, identifying herself as Kolbee Taylor. 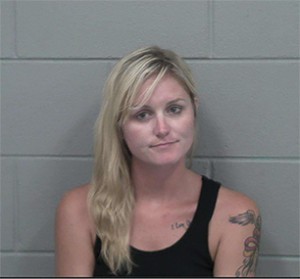 Taylor told the deputy that she and some friends were on the dock when another friend called and asked if he could bring his boat and some friends over. Taylor agreed, as long as “certain people on the boat” did not come with him. The boater arrived with Hancock and others on board. While the boater went to nearby location get some shorts, Hancock and the other female asked to use the bathroom in Taylor’s home.
Taylor told the deputy that a few minutes later she went inside and found Hancock and a male subject “looking around in her bedroom at the windows and pulling open drawers,” and ordered them out of the house. All started arguing with Hancock threatening repeatedly to beat Taylor.
Taylor told the deputy she went to her car parked in the front yard and got her pistol, “for protection.” Upon returning to the dock, Hancock continued to threaten her and upon boarding the boat, picked up a beer bottle, tried to hit Taylor with it and attempted to spit on Taylor. Several people on the boat had to restrain Hancock to keep her from leaving the boat or throwing another beer bottle. Everyone returned to boat and the driver pulled the boat away from the dock toward the middle of Spring Creek. Hancock continued to threaten to beat Taylor and to come back and steal everything in the house now that she knew how to get in. Hancock was restrained when she tried to jump off the boat.
Taylor told the deputy the boat was in the middle of the creek when she fired the gun “about 20 yards to the right in their direction.” Taylor’s brother took the gun from her and when the deputy asked where the weapon was located, she said she didn’t know but led him to a trash pile behind the house and pulled the gun case containing the gun out. The deputy took possession of the .380 semi-automatic pistol with a magazine with two rounds missing.
Hancock told the deputy that it was Taylor who threatened to beat her, and she only “returned what was given.” She denied throwing a beer bottle at Taylor or trying to spit on her. She told him Taylor fired the gun toward the water where a friend and his son were on a float. That subject told the deputy that when he heard the arguing he took his son to the other side of the boat house because he didn’t want his son to hear “the cussing.”
Both Taylor and Hancock were taken into custody. Taylor is charged with felony aggravated assault and reckless conduct, while Hancock is charged with simple assault and criminal trespass.
Both women were booked into jail and later bonded out.

From STAFF REPORTS AMERICUS — If it’s summertime in District 6900, that mean it’s time for the Rotary Youth Leadership... read more