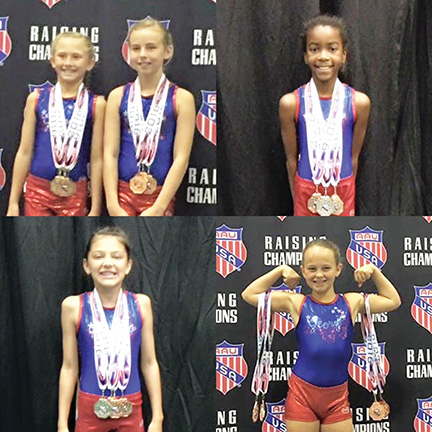 On June 30-July 2, Sumter Gymnastics finished their amazing competition season by having five gymnasts travel to the AAU Gymnastics Nationals at Wide World of Sports in Orlando, Fla. The gymnasts brought home 19 total medals from this event.
Wimberly Hines was named National Champion on the balance beam with a score of 9.275 and also in the All-Around category with a score of 36.75. Rayonna Clay (floor- 9.275) and Morgan Minick (vault- 8.95) both came home with second place finishes. Mia Mixon (9.25) and Kayleigh Cox (8.8) earned sixth place in the floor competition.
“I am so proud of these five gymnasts,” said Melissa Singley, gymnastics director of the Sumter County Parks and Recreation Department. “They overcame new and difficult elements in routines, painful falls, and tough judges to get personal bests, tons of medals, and cheered on fellow gymnasts from all around the country. We were with people from Connecticut to California. I love the sportsmanship these girls show to other gymnasts and teams and their perseverance on a tough day. Thanks to the parents for letting me work with these awesome girls.”
A wonderful Nationals experience followed up an amazing state meet for all the Sumter Gymnastics team gymnasts. On April 16-17, the silver and gold level gymnasts traveled to Carrollton. The bronze gymnasts traveled to Augusta on April 23.
“Our Bronze gymnasts are state champions as a team,” Singley said. “This is the first time a team from Sumter Gymnastics has been state team champions since we opened in 2009.” 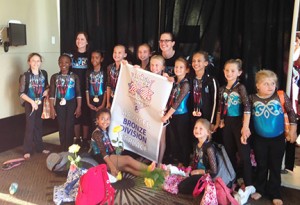 Contributing to the team were three gymnasts who were state champions in their age group. Lily Haugabook is state champion in the floor competition with an impressive score of 9.7, bars (9.15), and all around (37.25). Layla Williams won first in the all-around category with a score of 37.2, and Ila Johnson earned first place in the vault competition with a score of 9.3.
State runners-up include Cameran Long (9.375 on beam), Kayleigh Cox (9.55 on floor), and Rayonna Clay (9.1 on bars). Riley McRee finished third on the bars with a score of 9.1. Sarah Kate McRee (9.05) and Lauren Williams (8.85) finished fourth on bars in their age groups. Ava Cook placed fifth in the vault with a 9.0. Amelia Kinnebrew placed seventh on the bars with an 8.9 and Ella Wells scored an 8.6 in the vault for a ninth-place finish. 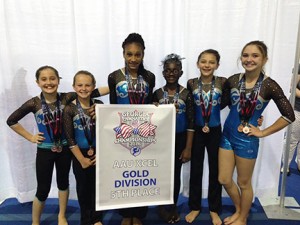 Both the Silver and Gold teams earned fifth-place team finishes in the state competition. There were three local gymnasts who earned the title of state champions. Madison Smith finished first on the bars with several impressive scores, including a 9.6 on the beam, a 9.3 on the floor, and an all-around score of 37.2. Wimberly Hines won on the vault with a 9.175. She also won on the beam with a 9.575 and amassed an all-around score of 37.275. Kayden Gresham finished first on the beam with a huge 9.625. Finishing as state runners-up were Morgan Minick (9.075 on vault and 9.15 on beam), Carley Codner (9.025 on floor), Myer Bernstein (8.975 on floor), and Macie Deriso (8.75 on bars). All of these athletes brought home third-place finishes. Gracie Burrell placed fourth on the floor with a score of 8.85. Makiyia Jones placed fifth on the bars with a score of 9.05. Madison Ingram earned sixth place in the floor event with a score of 8.975. Mia Mixon was sixth on the floor with an 8.925 and Mariana DeTitta was eighth on the vault with a score of 8.875.
“I cannot say enough about all the hard work the gymnasts, coaches, and parents have put into this program,” Singley concluded. “I couldn’t do this without the other coaches in the gym- from our recreation coaches who prepare the gymnasts when they come into the program to possibly be on team one day to the other team coaches that help these team gymnasts perfect these routines and skills. This is the best State meet we have had since we opened in 2009. This is the first year to have a team state champion and six individual state champions. We have some amazing talent in our team gymnastics program and we are very excited to see what next season brings.”

By MICHAEL MURRAY michael.murray@americustimesrecorder.com AMERICUS – The Americus Travelers 16U Baseball Club returned to their home field at the Thomas... read more