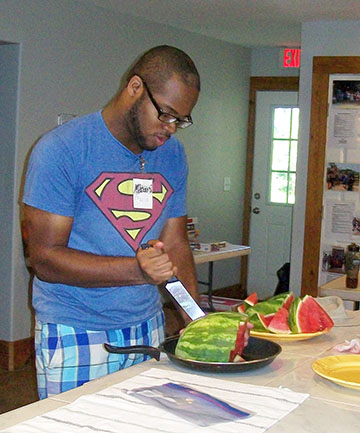 AMERICUS — Back in the 1960s, long before many of our readers were born, a husband-wife team named Sy Miller and Jill Jackson wrote a song called “Let There Be Peace on Earth” (and let it begin with me). Concerned that children were growing up in a world torn by war, racial discrimination, economic disparity — all the evils they still face and fight — the couple gathered a group of young people of different religious, social, cultural and economic backgrounds and took them up into the mountains on a retreat. Their goal was to create understanding and friendship through education, discussion groups and living and working together. The young people learned the song “Let There Be Peace on Earth,” and one might say it was the song heard round the world. Millions know it; thousands have recorded it; by any definition, it is a standard. 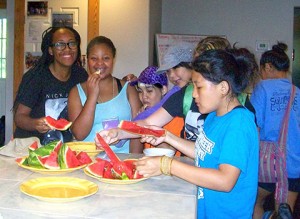 Fast forward 50 years and one can find the peacebuilding efforts in full play in our own backyard. For three weeks this summer, Peacebuilders Camp at Koinonia is offering three sessions for campers: Session One (ages 11-12), July 11-16; Session Two (ages 12-13), July 18-23; and Session Three (ages 13-14), July 25-30. According to Co-Founder and Administrative Director Jonah McDonald, the camps started six years ago with one week-long session and 16 campers. This summer sees three weeks of camp with 60 campers, young people of every racial and ethnic background who come from near and far to Koinonia for this remarkable camp. 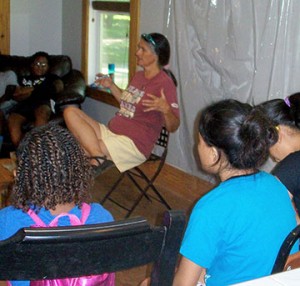 On Tuesday, the day had started with berry picking; then campers moved indoors, out of the summer heat, to settle comfortably in a circle around Marilyn McGinnis (co-founder and curriculum director).  She begins a review of the former day’s discussion about recycling; they chime in, politely, offering the three R’s: Reduce, Re-use, Recycle. From there the discussion moves to human rights, including the right to work, the right to fair wages, to fair working conditions, to equal pay for equal work. McGinnis is a good group leader —  always in charge but eliciting responses from the campers who have been paying attention. Their answers or comments indicate that they have been paying attention, and perhaps even more important, they understand that these issues matter. And these are 11-and-12 year-olds.
Twenty-two young people have gathered for this session, which is taking place in one of the cabins at Koinonia. The campers are Asian, African American, Hispanic, White and probably some others; these are just obvious. Watching them respond to the leader, and to each other, one is struck by their manners as much as by their quick minds and interest in the subject matter. It becomes obvious that these are issues that many of them have considered before — that they are very real issues in the lives of their parents, relatives or friends.
During a break, Program Director Mario Burton slices and serves cool watermelon, along with other treats. All the campers indulge; in this summer heat, nothing is better than a watermelon which (as its name implies) has lots of water. Then, at McGinnis’ direction, they gather for discussion and review. (One is impressed with their manners: not rigid, but respectful.)
Their afternoon plans include field trips into Americus. They will visit Rudy’s Happy Patch at the Perry Wellness Center on Furlow Street. There they will find workers with mental health issues living productive lives, working throughout the market serving customers, bagging fruits and vegetables and ringing up orders. Campers step carefully aside as a truck arrives with a load of fresh green beans. Campers then traveled to Café Campesino’s Spring Street location to learn more about their fair trade practices — what that means to the farmer who grows the coffee bean, and to all those involved in the export-import business. Café Campesino’s coffee is 100 percent fair trade, an issue they were studying. (In fact, part of their morning lesson had been on tracking the journey of a bunch of bananas from the person who grew them, through the export business, the shippers, the distributors and finally the shoppers who bought them in this country.) 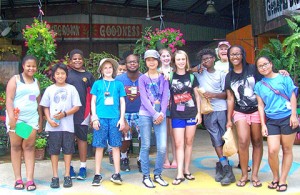 Peacebuilding campers having a good time at Rudy’s Happy Patch.

These field trips were a major part of Day Two — three days to go, and they were already learning more than many adults know about the economic consequences of U.S. trade practices — both positive and negative. They are eager learners, these young campers. They may be idealistic, but they are already realistic about boundaries and opportunities. Peacebuilders Camp is a unique opportunity for them to learn, in a safe setting, that they are part of the future, a future they are encouraged to help mold in peaceful ways.
According to their mission statement, Peacebuilders Camp at Koinonia Farms’ mission is “to provide a transformative summer camp experience that empowers a diverse community of youth to work toward peace, justice and human rights.” It is a sign of the camp’s success that these young people are engaged — that they are raising questions and seeking answers to that age-old dilemma: how to promote peace in a world torn by so much strife.
They are learning it begins with them.