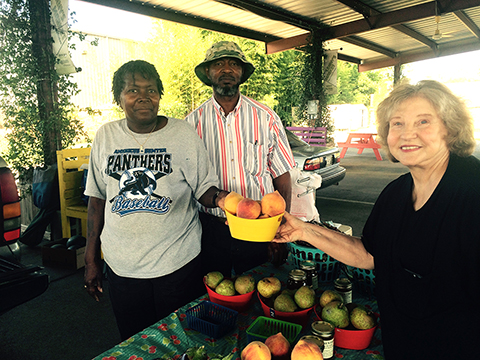 AMERICUS — The delicious jewels of summer spill from baskets and boxes and the back ends of pickup trucks at Lenny’s Market, the local farmers’ outlet, at 110 N. Hampton St.
Summer vegetables and fruits now at the peak of growing season are plentiful at the downtown market open year-round on Tuesdays, Thursdays and Saturday mornings.
Offerings include peaches, red ripe tomatoes, eggplant, blueberries, okra, green string beans, a variety of peas, yellow squash and much more grown by local and area farmers. In addition, fresh brown eggs, breads, pies and cakes take their place along with wood crafts of all descriptions and while you’re there why not pick up an apron sewn by loving hands to tie around your waist before cooking up all this summer deliciousness?
The market founded in the 1980s as the Americus Farmers’ Market was originally located on Jackson Street. Local growers filled their pickup trucks with the bounty of their huge gardens and drove them to town on Saturdays where they sold the fresh produce right out of the back end of the trucks on Jackson Street in the block between Lamar and Forsyth. 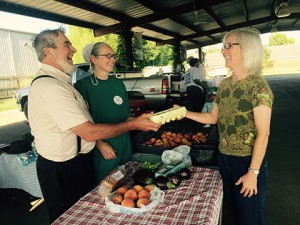 After years of being at this location, then City Councilman Leonard Waitsman saw the need to have a more spacious and permanent facility that could be used year-round not only as a farmers’ market but for other types of outdoor events from movies to concerts and rallies.
The city relocated the market to its present location in 2009, and dedicated and renamed it “Lenny’s Market” in honor of Waitsman. The move was apparently a good one as the market draws a number of vendors, although smaller this year as compared to past years, and includes growers from Sumter and surrounding counties. Among the requirements is a $25 annual fee paid to the city for submitting an application and a grower’s permit from the Sumter County Extension office.
Last Saturday morning, the market had a steady stream of locals seeking fresh produce.
Susie Nordwell of Americus took home peaches, okra and eggplant from vendors William and Lydia Overholt of Wilsofarms in Macon County, perhaps the most faithful year-round participants at the market. “I’m here every Saturday; it’s good place to buy fruits and vegetables,” says Nordwell, a registered nurse employed at Phoebe Sumter Medical Center.
The Overholts drive from their farm near Marshallville on Saturday mornings with the exception of Christmas and New Year’s to sell brown eggs from the chickens William raises, as well as local honey, Lydia’s fresh baked sourdough and whole wheat breads, made from the grain they grow, various cakes, pies, pecans, jellies and granola as well as vegetables from their garden.. 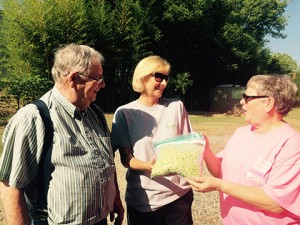 Sumter farmer Edward Greene and his wife Jennie,were busy helping customers select jalapeno and habanero peppers, watermelon and many other produce. Linda McClendon of Americus bought peaches and ripe tomatoes. “I’m here at the market every Saturday,” said McClendon, before moving on to another grower.
The Greenes are long-time vendors and offer produce in season spring through fall that ranges from a wide variety of peppers, squash, tomatoes, beans, peas,  pears from their trees to collards, turnips, kale, sweet potatoes, cabbage and broccoli they raise. “The first crop of tomatoes is coming to an end, but the fall crop won’t be far away,” said Jennie.
Edward Greene has sold produce at the market since it was on Jackson Street. Asked about the drop in vendors, he said some of them have moved to a busy thoroughfare or corner. But the Greenes like being at Lenny’s Market for many reasons, including the sturdy covered area provides shelter from the elements.
Charlie and Yvonne Satterfield, both retired residents of Schley County, had three varieties of shelled peas: cream eight, pink eye and purple hull grown available – all grown by their son, Brad Satterfield, on property in Wilcox County.
“Business is real good,” said Yvonne Satterfield, “people like peas that are already shelled because the shelling process is so time consuming.” She explained their son works on military aircraft at the Warner Robins Air Force Base and farms for a hobby. “He grows the peas, picks them with a picker, and uses an industrial sheller to shell. He then bags them in bushel and half-bushel plastic bags that we sell.”
Americus businessman Robert Melton turned to woodcrafts after retirement. He had a large display of various signs as well as a number of carpenter bee traps he makes. “These sell really well, especially in spring when the carpenter bees begin to swarm,” said Melton. Melton has been into woodworking some 20 years, he explains. A pie safe was the first piece he made in his home workshop. 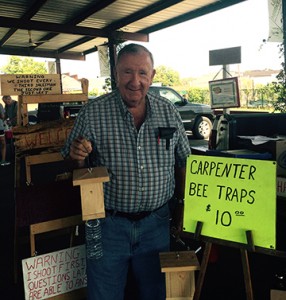 Robert Melton with some of woodworking products.

“I enjoy woodworking and I make the pieces good and sturdy so they will last a long time,” said Melton. Among his wood items are child-size tables and matching chairs, stools and benches. He also sharpens knives and scissors.
Another grower, Clayton Kendrick, a retired mechanic and plumber of Ellaville, had bags of sparkling blueberries and fig preserves. He said he was pleased that business has been good this season. The blueberry season is winding down, he pointed out, but it was brisk while it lasted. He’s sold 80 gallons of berries gathered from 23 bushes, he said, and he expects business to increase next year. He recently planted 25 additional blueberry bushes.
Among requirements a vendor must meet other those than listed above include: the kind of products that can be sold; labeling, and who can sell. For additional information contact: Patrick Kay, director of the Americus Main Street program, located on the first floor of the Americus Municipal Building on West Lamar Street. 229-924-2211, ext. 235.

Board of Appeals turns back summary judgment in Wright v. Sumter Elections