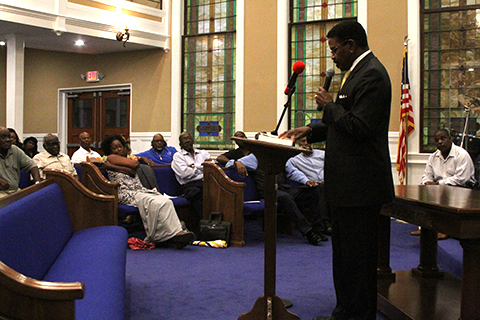 AMERICUS – Over 50 local citizens made their way to Bethesda Missionary Baptist Church on Forrest Street to participate in a community rally on Aug. 4.
After an invocation by Pastor DeRienzia Johnson, the Rev. Mathis Wright, president of the local NAACP Chapter, addressed the crowd, saying that a pair of speakers, Albany attorney, Maurice King, and Americus City Councilman, Nelson Brown, would deliver messages. After this portion of the rally had concluded, Wright said that a question-and-answer session would be held to address audience members’ concerns.
King took the podium first to speak about his concerns on a vote on potential Opportunity School District (OSD) legislation. King stated that, if the legislation is passed following a referendum in November, an amendment to the Georgia Constitution would be adopted. Under the new law, schools that score under 60 percent on Georgia’s College and Career Readiness Index (CCRPI) would be eligible to be taken over by the OSD, which would be controlled directly by the state government.
King stated that he opposes the measure, saying, “One of the things that this OSD [measure seeks to do is to take away local control at a time in which the demographics [of many districts] are changing.” King went on to say that the measure would likely put a lot of pressure on school districts to meet the state standards and that could potentially be detrimental to the district. He said that many local educators could potentially lose their employment if control of the district were turned over to the OSC. 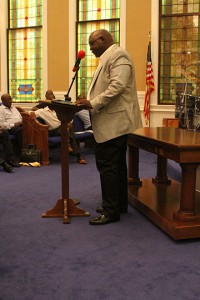 Albany attorney Maurice King was one of the speakers.

“All you have to do is to find a way to get rid of the students who are not doing their work and keep the good students,” he said, in his explanation of how such a measure could potentially negatively affect the area when local districts are pressured to perform. We went on to describe how local districts might be enticed to concentrate the system’s brightest students in one particular school in order to insure that that particular school meets the proposed standards, leaving  students at other schools in the district at a disadvantage.
One of the reasons he stated that local districts should maintain control of the local districts is because personnel at these schools are often locals who know the community and empathize with students who are often considered to be “problem students.”
King went on to encourage audience members to vote against the measure in November.
Following King’s speech, Brown took the podium to discuss some of the issues that he has seen around the country in recent months. Brown condemned the recent killings of law enforcement officers in Baton Rouge and Dallas before saying, “Any time a person can help another person, God has blessed them.” 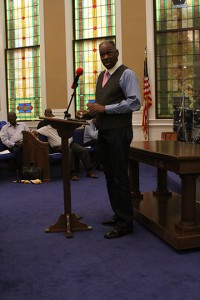 Americus City Council member Nelson Brown was also a speaker at the rally.

Brown then discussed his personal history, saying that he was drafted to serve in the army as a young man before joining the Americus Police Department. Brown served as a police officer in Americus for over 30 years.
Brown described some of the obstacles that he had to overcome as a law enforcement officer in a society that was, then, segregated before he went on to discuss the phrase, “Black Lives Matter.”
“We hear about Black Lives Matter,” Brown said. “A lot of people don’t understand what some people are saying when they say the words ‘Black Lives Matter’.” Brown went on to explain that he firmly believes that all lives are precious and that the term “Black Lives Matter” is not intended to denote that the lives of other demographics do not. Brown said that the community should work together and support one another, regardless of race or profession or class.
Brown stated that there are likely law enforcement officers in every community that might seek to abuse power. “If you’re not a part of the solution, you’re part of the problem,” he said. “We have bad eggs here, too … [This will only change] if the officers within the departments denounce them and keep them in check … That’s how you make a true change.”
Brown went on to say that this type of change will take a lot of courage to implement. “We have a lot of good officers, but I’ll tell you that some of the officers have to change,” he said.
Brown continued, saying that he does not see how a person could say the words “Blue Lives Matter” while complaining about the term “Black Lives Matter.” “What we have to do is to recognize that all lives matter and start acting like your life is just as important as my life,” he concluded.
King then joined Brown at the podium for the question-and-answer session.
Brown was asked who a citizen should talk to if they have a complaint about a law enforcement officer. Brown stated that the plaintiff should address the offender’s superior officer and follow the chain of command. Addressed with the same question, Americus Police Chief Mark Scott, who was also in attendance, replied that his door is always open and that he would be happy to address any citizen complaints. Brown also mentioned the possibility of creating an independent board to address citizen complaints.
City Manager, Steve Kennedy, also encouraged locals to contact him if there are any issues with a city employee. “If there’s an issue, please let me know because I believe that that means that there is an opportunity to improve,” he said.
Local citizen, Craig Walker, then asked King if there is a list of the Georgia legislators that introduced the OSD legislation. King stated that he would attempt to compile a list and make it available to the event’s attendees.
Local citizen, Marcus Arnett, then addressed King, asking if the OSD legislation might prove to be a good thing in the long run since, “If [the local legislators] are making decisions that are putting our children behind, [could] there be an opportunity for the state school board to improve the schools and make them better for our kids?”
King responded, saying that, since the measure would require an amendment to the Georgia Constitution, if the results ended up hurting a community, there would be no way to reverse that without having a court strike the amendment down.
Arnett then addressed Brown, saying,” When we talk about ‘Black Lives Matter’… we’re not saying that they matter more. We’re saying that they matter also. What we’ve been shown over time is that the penalty for taking a black life has not been equal in regards to the taker. Some people say, ‘It happens all the time in our community.’ Well, those [who are not sworn in to serve and protect us] go to jail.” Arnett went on to say that “Black Lives Matter” protesters are not just extremists, but people who want to emphasize the fact that the lives of African Americans matter also.
“The question is,” Arnett continued, “Why do you feel that every person that has said ‘Black Lives Matter’ in a sentence [at the rally] has also followed that by saying ‘All lives matter’? I want to understand why every person that has said ‘Black Lives Matter’ tonight has followed it by saying, ‘All lives matter.’ I want to know if it’s a statement of sincerity … ”
Brown responded that he agrees with Arnett’s assertion. “I don’t have a problem with the people who say ‘Black Lives Matter’… I hear people say that that’s a radical group. That’s just not true. What you have is a couple of individuals taking advantage of that and turning [the movement] into something negative. For the majority of people that say ‘Black Lives Matter’, I know what they’re saying. It’s not that white lives don’t matter or that Hispanic lives don’t matter. It’s just that black lives matter just like other lives.”
Wright then closed the question-and-answer session and invited attendees to participate in the voter registration drive held in the lobby of the church. “All of us need to vote,” he said. “That’s how you make a difference.”
The Rev. Larry Sims closed the rally with a benediction prayer.