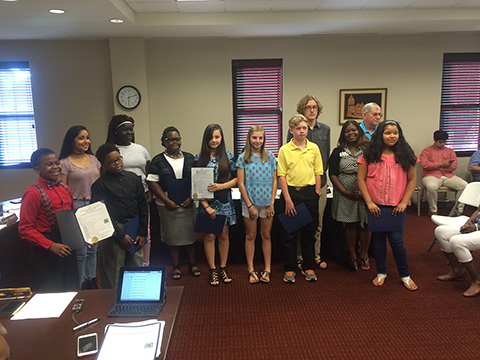 AMERICUS – The Sumter County Board of Commissioners (SCBOC) convened Aug. 9 at the Sumter County Courthouse for the monthly work session, and returned a week later on Aug. 16 for the board’s monthly regular meeting.
After opening the regular meeting, board chairman, Randy Howard, issued a proclamation congratulating over 20 local 4-H members for their participation in Project Achievement, in which the local chapter had taken part. Each member was awarded a certificate of achievement from the board for their award-winning research projects submitted to the event.
The board then discussed the possibility of issuing a letter of credit in the amount of $50,000 to the Sumter Livestock Authority.
Ray Rushing, a representative of the organization, spoke on behalf of the issuance, informing board members that the Department of Agriculture requires livestock authorities to have a letter of credit. Rushing went on to remind the commissioners that the authority is owned by the county and that the organization’s administrators work pro bono. Rushing stated that, recently, a new truck had been purchased by the authority so that they could reliably transport cattle without worry of losing stock in the heat. Rushing went on to say that the price of the truck had depleted the authority’s “cushion money” and that a recent drop in cattle prices has had a negative effect on the local industry.
“Operations will be suspended in two weeks if the county doesn’t act soon,” Rushing stated. The funds would be allocated for use in operational expenses, “keeping the barns up and running,” as Rushing put it.
County administrator, Bill Twomey, agreed to meet with Rushing and the other administrators of the authority the following day and see if they could come up with a solution.
Other items on the agenda at the regular meeting include the following
• Approval of a request from Sumter County Parks and Recreation executive director, Tim Estes, to lease a new color copier at The Columns at Boone Park, which Estes said would save the county money ($40 per month) while, at the same time, upgrading the currently outdated equipment.
• The board approved an inmate labor request from the Andersonville Guild with the stipulation that no inmate labor be used on private property.
• Jerry Sanders was appointed to the Sumter County Library Board.
• The board approved an audit engagement letter from Chambliss, Sheppard, Roland, and Associates, LLC.
• The board discussed the Land Bank Authority Agreement, specifically, how worker’s compensation should be handled with regards to the authority.
• The board approved Sumter County’s participation in the Eaton Road Funding Project, which would create an emergency exit road from the former Cooper Lighting Building, on Southerfield Road, to Basket Factory Road.
• The board approved a sole-source purchase request for Southland Controls to perform maintenance on the air conditioning units at the Sumter County Courthouse, in the amount of $53,000.
At the board’s work session, a week prior, nearly 50 people crammed into the meeting room, many of whom are senior citizens, as local resident Bob Ridgway addressed the board. Ridgway demanded that the commissioners include a referendum in the upcoming election that would exempt senior citizens from paying taxes to the Sumter County School System. Commissioners Mark Waddell and Howard, informed Ridgway that it is not up to the Board of Commissioners to make that decision for the Sumter County Board of Education (BOE), stating that he could contact the BOE with his concerns.
Other items of business discussed at the work session included the following.
• Sumter County resident, Eddie Wallace, spoke against the potential opening of a liquor store in his neighborhood (Jenkins Road), saying that it would likely encourage loitering on his property.
• The board approved an intergovernmental agreement between the Georgia Department of Corrections and the SCBOC to provide access to resources for offenders who have not received a high school diploma to earn a GED. Warden Jimmy Colson informed the board that, through the agreement, the county will receive up to $25,000 for inmates enrolled in the program.
• Local CPA, Bill Krenson, presented the county’s yearly audit reports to the commissioners.
• The board approved an inmate work detail agreement between the Georgia Department of Corrections and Macon County to provide inmates from the Sumter County Correctional Facility to work in Macon County four days per week.
• County Extension Coordinator Bill Starr addressed the board, asking that they ratify a letter of support for the University of Georgia application for the Agricultural and Food Research Initiative’s Childhood Obesity Prevention Challenge Area. Starr stated that the program could have tremendous benefits for local children.
• The board approved a 2017 Local Maintenance and Improvement Grant in the amount of $597,333.70.
• The board approved a policy for reporting disciplinary actions against alcoholic beverage licensees who incur infractions in accordance with state law.
• The board approved a loan and grant agreement between Jerry Hargrove and the SCBOC in the amount of $41,185.