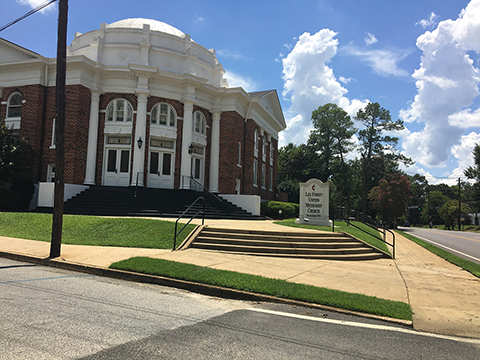 AMERICUS  “In the future, when your children ask you, ‘What do these stones mean to you?’ you should tell them …” Joshua 4:6-7
During the pastorate of the Rev. J. A. Thomas at First United Methodist Church (UMC), he felt a growing need to start a church in the new residential section of town. He pushed the idea hard and helped to organize the second Methodist church inside the city limits. It was 1916, and there were 148 charter members. The Rev. A.W. Quillian Jr. was appointed as the pastor.And so began the first page in the thickening history book of Lee Street United Methodist Church, which will celebrate its 100-year anniversary in October.
One hundred years only comes once in a lifetime, and Lee Street UMC will be praising and thanking the Lord for blessing the church for 100 years.
Lee Street United Methodist Church’s anniversary celebration begins at 6 p.m. Saturday, Oct. 1 with an evening of dinner, storytelling and music. The anniversary celebration continues at 10:30 a.m. on Sunday, Oct. 2 with the morning worship service with the the Rev. Ed Candle bringing the centennial message. There will be special music, lunch, and fellowship following the service.
There will be historical displays, past newspaper articles, record books and pictures of the sanctuary on display.
The church has experienced change and some storms but most of all, but its members thank God for the mountain top experience that they’re embarking on right now.
David Duck, Jody Robinson, Herbert Owen, John Jordan, Chet Ragsdale and Aubrey Abbott have been called into the ministry and came right out of the congregation.
“We’re celebrating 100 years of existence in this community, and we’re excited about it,” said Lee Street UMC’s pastor, the Rev. Dr.  Dennis Stalvey “Looking forward to another hundred.”

Knights of Columbus donate to Books for Sumter Children