Panthers drop 31-14 decision to Crisp in opener; “Battle of the Flint” 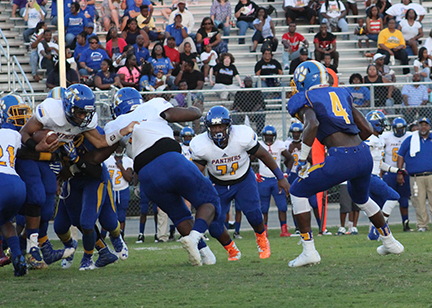 Photo courtesy of the Cordele Dispatch: ASHS’ AJ Payne follows his blockers past Crisp’s defensive line during the first quarter of the Panthers’ August 19 contest against the Crisp County Cougars.

CORDELE – The Americus-Sumter High School (ASHS) Panthers football team kicked off their 2016 season on August 19, rekindling an old rivalry that has lay dormant for three years. The Panthers traveled to Cordele to take on Crisp County in a match-up historically dubbed, “The Battle of the Flint”. Despite ASHS building an early pad, the Cougars managed to stage their comeback in the second half and earn a 31-14 victory over the Panthers.
The two teams have not met on the gridiron since the fall of 2013.
After being held to one set of downs following the opening kickoff, the Panthers were forced to punt to their opponents’ 19 yard-line.
The ASHS crew subsequently recovered a fumble on their opponents’ 36. On the following play, Panther quarterback, AJ Payne, zeroed in on receiver, Braylen Williams, to connect on a 36-yard pass and open the game’s scoring. Panther place kicker, Carlos Hernandez, deftly split the goalposts to give the visitors a 7-0 advantage with nearly 10 minutes left to play in the first quarter.
The Cougars responded by ending a 13-play, 42-yard drive with a 29-yard field goal to put three points on the board for the hosts.
With nine minutes left to play in the half, ASHS’ Kolby Lewis opened the Panthers’ final scoring drive with a 20-yard punt return to the Crisp County 28 yard-line. With the aid of a pair of flags thrown against the hosts, the Panthers were able to push the ball to their foes’ four yard-line. From there, Payne ran a keeper into the end zone and Hernandez added another PAT to put ASHS ahead 14-3 before the half-time break.
Crisp’s offense tightened up in the second half, capping off both a seven-play and a five-yard play drive with touchdowns and extra points to grab a 17-14 lead in the third stanza.
For good measure, the Cougars added another pair six-pointers and their respective PATs to lead by 17 points at the game’s conclusion.
The Panthers will return to action on Sept. 2, traveling to Vienna to take on the Dooly County Bobcats. The ASHS crew will return to Finklea-Robinson Field on Sept. 9 to battle the Lee County Trojans in their home opener.