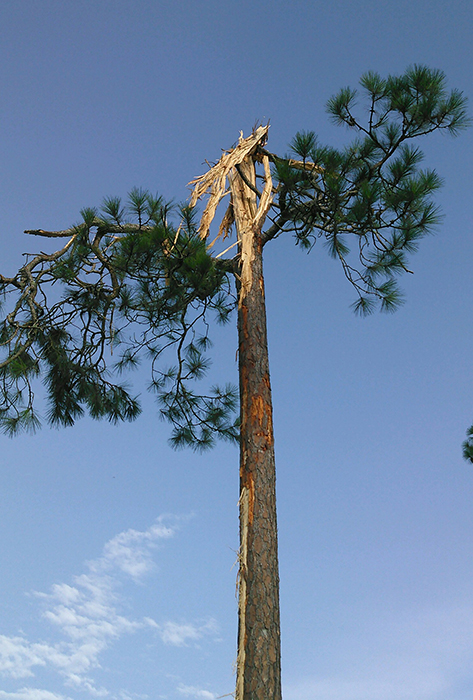 Shown is the top of a tree destroyed from lightning in Lenox, Georgia. Chunks of wood from the tree were found almost 100 yards away.

Lightning strikes are unpredictable and deadly. Lightning and floods are the two biggest causes of weather-related fatalities in the country, according to University of Georgia climatologist Pam Knox, who urges Georgians to pay attention to the signs of sudden storms.
Farmers and homeowners should be wary of lightning when working in fields and landscapes.
“In the Southeast, we can get lightning any time of year, but it is especially likely in the summer when afternoon thunderstorms develop quickly,” Knox said. “Lightning can pop up without warning and can occur far from where it is raining. Just because it is dry where you are does not mean that you are not a potential target.”
Tucker Price, UGA Cooperative Extension county coordinator and Agriculture and Natural Resources agent in Cook County, Georgia, says evidence of lightning strikes is everywhere, especially in trees. Lightning strikes have killed a few trees in his home landscape. This caught his attention last year and motivated him to educate south Georgians about lightning’s dangers.
“These storms that pop up, with [it being] as hot as it is, pack a lot of punch. That includes a lot of lightning,” Price said. “We just need to be aware of its dangers, and take some basic precautions to keep ourselves as safe as possible.”
Price described a simple formula to calculate the distance between you and lightning. When inclement weather occurs, count the number of seconds between a lightning flash and thunder, and divide that number by 5. The resulting number is equal to the number of miles between you and the lightning.
“Lightning can sneak up on you. It could look like cloudy, overcast weather overhead and then, all of a sudden, a bolt of lightning comes out of a cloud that you don’t even see,” he said. “It does not have to be a direct strike either. You could be in an area where the lightning strikes near you, and it can carry enough energy to hurt you.”
The safest action to take when the threat of lightning occurs is to seek shelter. Knox advises people to stay inside or in their cars for at least 30 minutes after the last strike. This will ensure that lightning has left the area.
During thunderstorms, stay off corded phones or electrical equipment indoors. Never seek shelter under a tree and stay away from things that have the potential to conduct electricity, such as barbed wire and fences.
“A lot of [this advice] is common sense. Seek shelter whenever you see dangerous weather. We have a tendency of wanting to finish the job before we seek shelter, but we’re taking a risk when we do that,” Price said. “Lightning is dangerous. It’s nothing to play around with.”