From the Archives: Taking a journey through the Southland Raiders’ historic 1986 football season; part 5 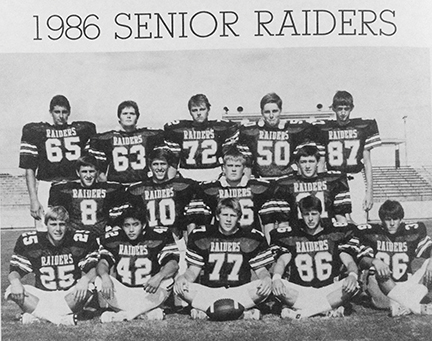 Editor’s note: We, at the Americus Times-Recorder, enjoy celebrating our area’s history of athletic excellence. Most recently, we have embarked on a journey into the past to detail the thirtieth anniversary of the Southland Academy Raiders’ awesome 1986 football season. While poring through our archives of old editions from the period, we have uncovered a wealth of knowledge about that epic football season, in which the Raiders plowed their way past competitor after competitor en route to the school’s very first football state championship victory.
While exploring the archives, I have found that the microfilms, on which many of the editions from the mid-1980’s were reproduced, has begun to deteriorate. Unfortunately, that means that I cannot go into the amount of detail that I would like to in retelling the stories of some of the Raiders’ exciting victories. Though this will likely be a disappointment to some fans, I can assure the Times-Recorder’s readers that I will make every effort to provide as much information as possible as the series progresses.
In our most recent installment, we read about the Raiders’ sixth and seventh victories of the season over Monroe Academy and Cavalry Baptist. The Southland squad had little trouble rolling over these non-region opponents and soon set their sights on their region schedule. With only four teams, including the Raiders, in the Georgia Independent School Association’s Region 1-AAA, Southland’s squad knew that they would have to continue their forward momentum if they wanted to go all the way, as any mistake could put their shot at the playoffs in jeopardy.
————————————–
In late October and early November of 1986, the national sports world was celebrating as the New York Mets had recently defeated the Boston Red Sox to win the World Series after seven games. The Americus High School Panthers were also preparing for the public school system football playoffs as the Americus City school board opened the first round of discussions about consolidation with the Sumter County Schools.
In other local news, a rash of thefts was being reported by the local police department and the Schley County Board of Commissioners had just voiced their support for a one-percent sales tax hike, to be voted on in the upcoming general election. At the same time, the Manhattan Shirt Company was preparing to celebrate 50 years of business in Americus. Amid all of this, the Times-Recorder’s pages were peppered with photographs and articles on the community’s preparations for the upcoming Halloween holiday.
Every Thursday, however, ATR sports editor, Ron Evans, would publish preview articles on the following weekend’s gridiron match-ups. Two days later, the Times-Recorder’s sports section would always include a recap of Friday’s action.
Evans elaborated on the Raiders’ readiness to take on Deerfield in an Oct. 23, 1986 article titled, “Southland comes back to face region rival, Deerfield-Windsor”. 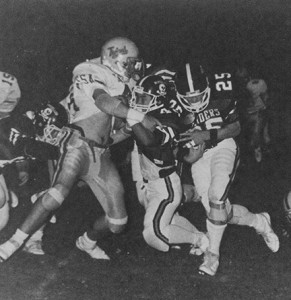 From the 1987 Southland Academy Yearbook:
Southland’s Chan Reeves (25) rushes past a defender as Paul Kim (42) blocks during an early-season contest during the Raiders’ 1986 season.

“The classic match-up of the Georgia Independent School Association Class AAA is at hand Friday night in Albany and will be the number-two Deerfield-Windsor Knights hosting the number-one Southland academy Raiders in a battle which will also be the Region 1-AAA opener for both teams,” the article stated. “With three region games, this contest is that much more important.
“Southland is 7-0 and coming off of an open week. ‘A refreshing stop for the Raiders,’ according to Southland coach, Loveard McMichael.
“’Usually, we don’t like to take a week off but this was a good stop. It allowed us to heal some bumps and bruises…’ he said.
“’It’s going to be tough. They have real good speed both offensively and defensively,’ said McMichael…”
In Evans’ “Week’s Picks” column on the sports page of that same edition, the ATR sports editor wrote that, with the Raiders having an extra week to prepare for the region opener, he predicted a 14-point Southland victory, saying that the victor will likely be Southland, 21-7.
Evans wasn’t too far off, as evidenced by ATR correspondent, Mike Mead’s, recap of the match-up in the Oct’ 25 edition of the Times-Recorder dubbed, “No. 1 Southland whips No. 2, Deerfield”.
The content of this article is shared below:
No. 1     Southland whips No. 2, Deerfield