Looking back to 1976 Presidential race 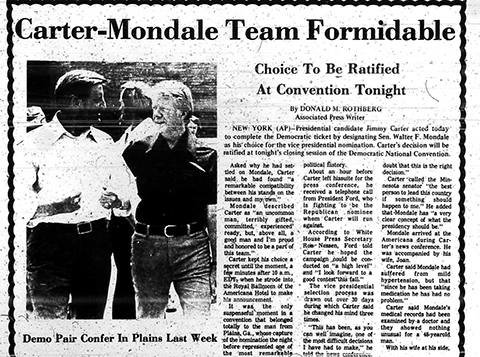 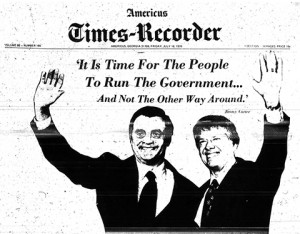 On July 15, Mondale officially received the Democratic Party nomination for vice president. In his remarks to convention delegates, Mondale offered one of the key reasons why he was excited about running with Carter and why he thought that 1976 was going to be a good year for Democrats. Mondale said that in 1976 the party was united. In particular, he contended, the Democrats nominated a ticket that would overcome and heal the remaining regional divisions in the party and in the country. Unlike the last three elections, with a southerner at the top of the ticket, Mondale believed Democrats would do very well in the South come November.
Mondale said this in his convention address: “For well over a century our Nation has been divided North against South, and South against North. Since the Civil War bitterness, suspicions and doubts have sorely troubled and divided our Nation as well as our Party.
“Perhaps all of us are to blame; certainly all of us have suffered.
“But tonight we stand together as a Party. We stand together as a Nation, reunited at long last, North and South, Georgia and Minnesota – one.
“We are one and we are together with affection and understanding, rejoicing in our new-found and permanent national unity. This year for the first time since 1848 we will elect a new President of our county who is a Southerner and who showed his people and our country how to get together in national unity.”