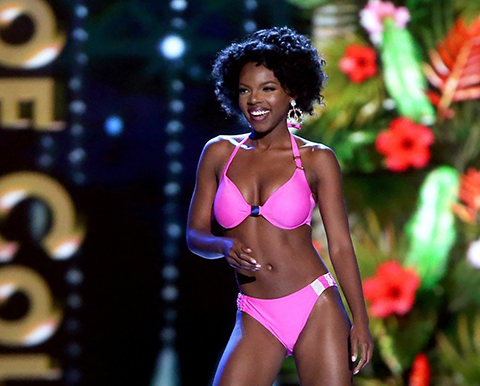 The state of Georgia and Americus are well represented at the 2017 Miss America Pageant in Atlantic City this week that began with the contestants’ preliminary competition on Tuesday.
On the first night of preliminaries Tuesday, Cierra Jackson, 2016 Miss District of Columbia, won the lifestyle and fitness award at Boardwalk Hall in Atlantic City and a $1,000 scholarship. She walked the runway in a bright orchid bikini to the sounds of “Me Too” by Meghan Trainor.
Cierra Jackson has strong ties to Americus and has been a frequent visitor since childhood, spending summers and holidays with her grandparents, Lawrence and Bertha Hosley of Americus. Her parents, Gregory and Dr. Cheryl Freeman-Jackson of Columbus, are former residents and Americus High School graduates. They are in Atlantic City to support and cheer for their daughter.
Attempts to contact them weren’t possible. Jackson is sequestered with other pageant contestants during competition week.
Jackson, 24, an alumna of Spelman College, worked as a communications intern at the White House in the office of the chief of staff. She has an interest in environmental law and a bachelor’s degree in political science.
Camille Sims, Miss New York, is another pageant contestant with strong local ties. She is the granddaughter of the Rev. Thomas Sims and the late Vivian Sims of Americus and the daughter of Tommy Sims and Tracy Allen-Sims, also former residents and Americus High graduates. The younger Sims was a football standout at AHS and former NFL player.
Another Georgian is the reigning Miss America Betty Cantrell of Warner Robins who won the title last year as Miss Georgia. The previous year she was crowned Miss Presidential Pathways, a pageant directed by Crystal and Mark Waddell of Americus. The scholarship awards she received from the combined Miss Georgia and Miss America pageants are estimated at $80,000.
Cantrell walks the runway for the final time as Miss America Sunday night and will crown the new winner. Patricia Ford of the metro Atlanta area is competing as Miss Georgia 2016.
The Miss America Pageant 2017 will be televised live on ABC at 9 p.m. Sunday.
Those from Americus sitting in the audience at Boardwalk Hall tonight are the Waddells, Everett Byrd and Ima Trear along with the Sims, Jackson and Hosley families. They also participated in other Miss America events, an autograph party with the contestants and Miss America and parade of contestants earlier today.