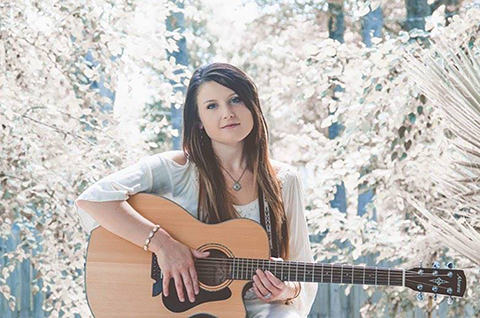 Sara Brown, in a promotional photograph.

Like a blossoming flower making its way up through a crack in the asphalt — this is one way of describing a native of Sumter County, Sara Hawthorne Brown, a budding artist who has never let her struggles and disappointments keep her down. She continues to blossom brilliantly no matter the circumstances.
Brown finished high school in 2009, and went on to college to acquire a degree to make her way in the world. She acquired her paramedics certificate, and now works with Tift County Fire and Emergency. However, unlike many, she was in and out of foster care as a child, and has used singing as her outlet of positive expression. Since her childhood, she has made an exceptional transformation into a bright future.
As Brown describes a childhood of singing, she thinks of her family and community as a powerful force — a force which influenced and provided her a haven of love, safety and a supportive network in which to thrive.
Brown said among her supportive network was the First Baptist Church Drama Team in which she was actively involved, and her experience in Sumter County Chorus, where her music instructor Greg Aplin served as a positive influence for three years.
“Mr. Aplin always believed in me and motivated me,” she said reminiscing of her school years performing at Wild Adventures, carnivals and fairs.
Today, after singing in various venues on her own for years, she is concentrating on finishing her first solo recording, which will be released soon. She is recording the solo with record producer/musician Paul Hornsby who has served as producer for the famous Charlie Daniels Band, Marshall Tucker Band, and Wet Willie. Brown sings indie-folk/ country which covers the genre of both southern classical rock and country, balanced with a modern mix to include hits from alternative rock, indie/folk, and soul.
Brown said while her upbringing was full of ups and downs, God was always there opening doors to loving, adoptive parents who raised her, but He has also opening the door recently, for her to begin developing a relationship with her biological parents.
“My dad and mom are Richard and Misty Hawthorne,” she said describing her adoptive parents. “My birth mother is Debbie Mladek Plant and Dan Plant,” she said.
“I learned a long time ago that if you want something, you have to do it yourself,” she said. “You are the most dependable person you know. I had help along the way; don’t get me wrong, but I had my share of disappointments, too,” she said, adding, “People walk in your life, people walk out, some are never there. You just learn to be your own wings,” she said. This the concept used in making her single demo which is titled, “If You Will.”
Brown has performed across South Georgia including Americus, Albany, Cordele, Tifton and Bainbridge. She has performed at the Lake Blackshear Resort, Chehaw Park and at weddings.
“I teamed up with a girl named Lizz Faith to participate in the Battle of the Bands,” she said explaining they were called, “The Isabelles” during the competition. “I have also performed with the Caliber Band from Bainbridge,” she said.
Brown said she will begin performing in as many larger cities in South Georgia as she can, while waiting on her CD to be recorded in December. 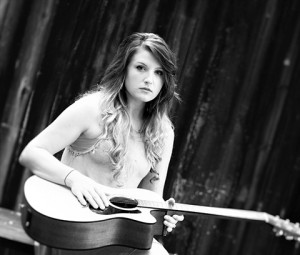 Sara Brown in a promotional photograph.

Brown describes her favorite artists’ influences as Lady Antebellum, Maren Morris, Alessia Cara, Alanis Morrissette, Ron Pope, Miranda Lambert, Dave Matthews Band, The Cranberries, Paramore, Tracy Chapman, Fleetwood Mac/Stevie Nicks, Bill Withers, Amy Winehouse and Melissa Etheridge.
“I just want to make music,” she said. “I want to perform and inspire people, give them goosebumps, just as my favorite musicians still give me. If I can make a living doing what I love, that would please me just fine,” she said adding, at the moment, her present employment as a paramedic does serve as a gratifying experience.
“Until then, I will touch people’s lives as a paramedic; it has its perks too,” she said, explaining it didn’t have the same adrenaline as performing for others through music.
As Brown reflects on what has supported her most, she describes a soft, gentle voice which carries her to new heights.
“The only one who has never disappointed me is God. He has always been there, whispering which road I should walk down,” she said.
For more information on Brown’s performances visit her official Facebook page @SarhBrownMusic.Facebook
Brown resides in Worth County with her husband Brandon and their two children.