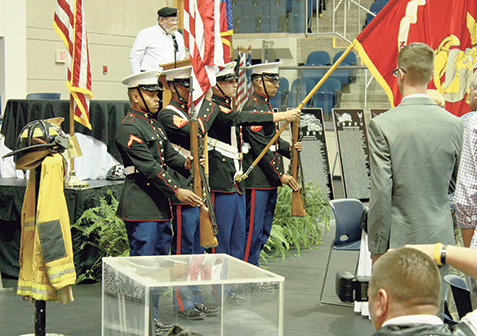 AMERICUS — About 700 visitors from around the nation are arriving in Americus for the Ride Home 2016. This the 14th year the event has been held in Americus and Sumter County. Rolling Thunder organizes and sponsors the event and provides escort for the special guests which number 160 this year.
Events start at 11 a.m. today when Georgia Southwestern State University, in conjunction with  Andersonville National Historic Site host the 11th annual Prisoner of War/Missing in Action (POW/MIA) Convocation in GSW’s Student Success Center. Derek R. Mallett, Ph.D., will be the speaker. The event is free and open to the public.
Mallett, who is currently an assistant professor of military history at the U.S. Army Command and General Staff College at Fort Gordon, spent three years as a research historian for the former Joint Prisoner of War/Missing in Action Accounting Command in Honolulu, Hawaii.
He has 15 years of teaching experience and has taught courses in American history, world history, military history, and Asian civilizations at institutions ranging from high school and community colleges to state universities and the professional military education system. Mallett’s research interests focus of World War II and the early Cold War and prisoner of war studies.
The convocation is in conjunction with the POW/MIA Recognition Day events, which honor service members who were prisoners of war and those who are still missing in action. Recognition Day will be observed on Friday. The weekend will also honor former POWs and the families of those still MIA with The Ride Home event.
On Thursday, the group will travel to the Warner Robins Air Force Base for POW/MIA Service.
On Friday morning, the entourage will line up at 8 a.m. in the Walmart parking lot for its ride to the Andersonville National Historic Site. The ceremony begins at 9 a.m. at the National Prisoner of War Museum inside the park. Member of the crew of the USS Pueblo will hold a reunion in conjunction with The Ride Home.
The Pueblo, an environmental research ship which was attached to Navy intelligence, was attacked by North Korean forces on Jan. 23, 1968, and captured, along with its 83 crew members. According to Wikipedia, “North Korea stated that Pueblo deliberately entered their territorial waters 7.6 miles away from Ryo Island, and that the logbook shows that they intruded several times. However, the U.S. maintains that the vessel was in international waters at the time of the incident and that any purported evidence supplied by North Korea to support its statements was fabricated.”
The Pueblo was taken into port by the North Koreans and its crew moved to POW camps. After being starved and tortured for months, the North Koreans threatened Pueblo Commander Lloyd Bucher, saying they would execute his men in his presence. Bucher relented and agreed to confess to spying, offered an apology and pledging not to spy in the future. As soon as the crew was released, the U.S. retracted the admission, apology and assurance.
The Pueblo’s POWs were required to appear before a Navy Court of Inquiry. According to Wiki, “a court-martial was recommended for the CO and the Officer in Charge of the Research Department, Lt. Steve Harris for surrendering without a fight and for failing to destroy classified material.” Secretary of the Navy, John Chafee, rejected the recommendation, saying that they had suffered enough. Bucher was never found guilty of any indiscretions and continued his Navy career until retirement. 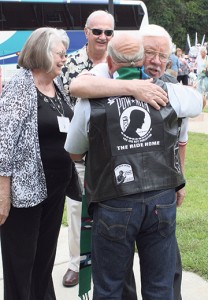 Hugs abound as old friends reunite at The (2014) Ride Home.

On Friday, Jill Hubbs, whose father, Commander Donald R. Hubbs has been listed as MIA since 1968, will speak for the MIAs. Donald Pappard, a Pueblo crewmember, will speak for the POWs. Andersonville NHS Superintendent Charles Sellars will join Lt. Skip Schumacher, a former Pueblo crewmember, in the rededication of the Pueblo plaque at the POW Museum.
At 3:30 p.m. Friday, the entourage will travel again from Walmart to GSW’s Storm Dome for the Missing Man Table Ceremony, followed by dinner. A candlelight service is scheduled for 6:55 p.m.
At 9:30 a.m. Saturday, the entourage will again line up at Walmart for the ride to the GSW  Storm Dome for a luncheon and recognition of honored guests.
Many of the visitors will attend a church service at 10 a.m. Sunday and then leave for home. The USS Pueblo’s closing dinner is at 6 p.m. Sunday.

Southland Academy’s homecoming football game will be played at 7 p.m. on Friday, Sept. 16  at against the Holy Spirit... read more