From the Archives: Taking a journey through the Southland Raiders’ historic 1986 football season; part 7 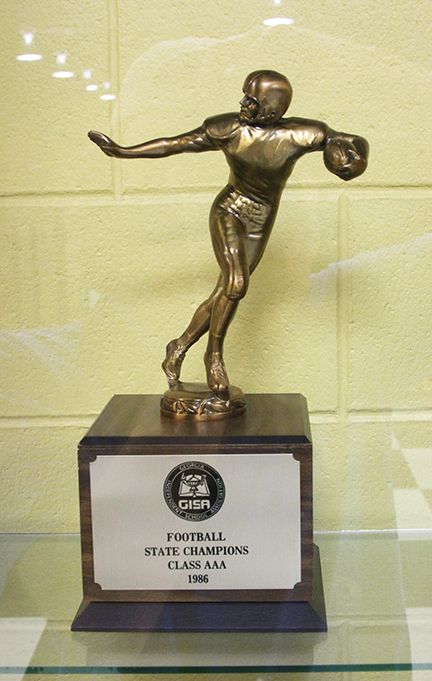 Editor’s note: We, at the Americus Times-Recorder (ATR), enjoy celebrating our area’s history of athletic excellence. Most recently, we have embarked on a journey into the past to detail the thirtieth anniversary of the Southland Academy Raiders’ awesome 1986 football season. Over the past several weeks, we have read about the 1986 Raiders’ surprise transition from a crew that many thought would be in a year of rebuilding, to a driving force in the state for independent school gridiron action.
While poring through our archives of old editions from the period, we have uncovered a wealth of knowledge about that epic football season, in which the Raiders plowed their way past competitor after competitor en route to the school’s very first football state championship victory.
In our most recent installment, we read about the Raiders’ initial pair of wins in the state playoffs; a 27-0 thrashing of Mt. DeSales, before moving on to Southland’s semifinal contest, which resulted in the Americus school gaining another shutout victory, 13-0, over Savannah Christian.
This pair of victories didn’t come as a surprise to any local football fans as the Raiders had already soundly defeated both of these teams earlier in the season. In fact, the Raiders had had little trouble taking down any challenger throughout their season to that point, aside from one vary narrow loss to Southwest Georgia Academy.
Following their latest win, however, the Raiders had only one opponent standing in the way of their goal of a state championship trophy; the Westfield Hornets. 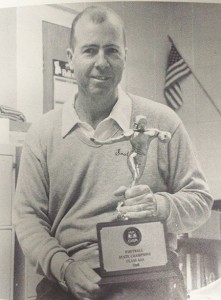 ——————————-
In late November, 1986 an aspiring, young Marine Lieutenant Colonel named Oliver North was just beginning to face nationwide scrutiny for his role in the ongoing Iran-Contra Affair, which was dominating national headlines at the time. In the national sports world, newspaper headlines were full of articles about baseball legend, Mike Schmidt, who had just been named the National League MVP for 1986. On the other side of that coin, an up-and-coming young go-getter named Jose Canseco had just been named Rookie of the Year for the American League.
On Nov. 29, 1986, two days after Thanksgiving, the Times-Recorder’s sports page was dominated by a nearly half-page photo, accompanying a headline emblazoned across the top of the page, stating, “Raiders win state championship: Southland Academy tops Westfield 14-7”, penned by ATR sports editor, Ron Evans.
The content of this article is shared below:
——————————-
Raiders win state championship: Southland Academy tops Westfield 14-7
By RON EVANS
Sports Editor
“Perry, Ga. – Southland Academy’s Raiders have arrived. After 20 years and four other tries, the elusive state championship title now belongs to the Raiders.
“Downing a talented, if not pesky, Westfield School squad 14-7 on a muddy field in Perry Friday night, the Raiders ended many years of frustrations by capturing the Georgia Independent Schools Association Class AAA championship.
“Southland came into the game with two things that got them there; big plays and defense. And, they got both again – when it counted.
“The big play(s) was a 47-yard touchdown pass from quarterback, Stephen Summers, to Jeff Rix in the third quarter to pull within 7-6 of the Hornets. This play was followed by an even bigger play.
“Lining up for the extra kick, David Roach mishandled the slick football, picked it up and ran around the right end leaving five Hornets lying on the field for the two-point conversion and all the points the Raiders would need.
“As for the defense, the Hornets gained just five total yards on the ground and 118 total for the game. The Raider defense controlled the Hornets.
“‘That touchdown wrapped the game up for us,’ said Raider head coach, Loveard McMichael. In this, his third year at the helm, he has now taken two teams to the state finals. Southland lost to Savannah Christian in 1984 in his first appearance.
“‘We really couldn’t get anything going early in the game but the touchdown and then David’s [Roach] run got us going,’ he continued. ‘The defense played just super. They kept us in the game.’
“’That pass play got them going. We had it covered but a guy missed the interception and the others were screened,’ said Westfield coach, Gordon Powers. ‘I thought we stayed in there and never did get down. But, I did see a little letdown when Roach scored on the two-point conversion that wasn’t planned.’
“Powers also saw the Raider defense take the game plan of the Hornets out. ‘They completely closed down the middle of the line and that gave them the opportunity to overplay the outside. That was a disadvantage for us,” he said.
“Westfield, which ends the season 10-2-1, scored first in the game with 53 seconds left in the first half. Drifting backwards, quarterback, Joey Brett, who was 12 of eight for 113 yards and no interceptions, tossed to his left to Sam Pearson, who was behind a wall of blockers. The net result of the third and ten play was a 31-yard touchdown. Brett Hardy added the extra point. For the first half, Southland had 89 total yards, all on the ground.
“‘We just didn’t have any big plays,’ said Chan Reeves, who finished the night and his career with 156 yards on 30 carries. ‘We didn’t come up with anything to get us going. We didn’t make the big first downs. But we didn’t get down at the half. We knew we could win.’
“Senior offensive and defensive tackle, Chip Sanderlin, who has been a four-year starter, has been waiting for this a long time. And one more half was too long. ‘We moved the ball in the first half, but we made some mistakes,’ he said. ‘We needed a big play to get going and that pass was it.’ 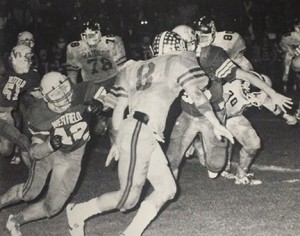 From the 1987 Southland Academy yearbook:
The Raiders’ David Roach bobs and weaves past Westfield defenders during the team’s Nov. 28, 1986 state championship game.