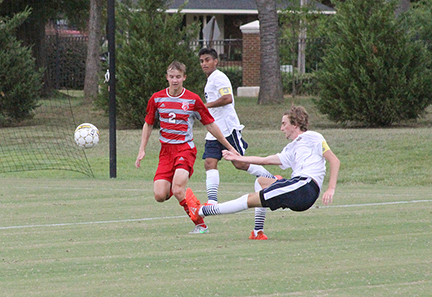 Michael Murray/Americus Times-Recorder: GSW freshman, Dylan Marshall, vies with a MGSC player for control of the ball during the teams’ Sept. 15 contest in Americus.

AMERICUS – Georgia Southwestern sophomore, Khayla Owens, scored all three of the Lady Hurricanes’ goals in their 4-3 loss to Middle Georgia State University (MGSU) on Sept. 15 at Hurricane Field in Americus.
The Hurricanes then took the field and was held to a pair of shots on goal against MGSU, suffering a 2-0 defeat at the hands of the Knights.
With the loss, the Lady ‘Canes drop to 2-2 overall on the 2016 season. The Hurricanes fell to 1-3 this fall following the defeat.
Owens is just the third Lady ‘Cane to score a hat trick in a game. She joins Elizabeth Keller (2008) and Stephanie Patrylo (2010) as the only other GSW women soccer players to do so. With her three goals in this game, Owens is now ranked fifth in the GSW history books for most goals scored in a season with five so far. The record is eight.
The Knights scored the first goal of the match in the 27th minute when Aspasia Karfakis got a breakaway and the ball went in off the post.
Owens tied it up four minutes later when she headed the ball into the net off a cross from Emily Blecha and scored again to take the lead in the 40th minute. Her second goal came from inside the box with an assist from Miranda Taylor.
The Knights tied it up in the last minute of the half when Hannah Gullickson scored unassisted to make the score 2-2 at halftime.
Owens got the hat trick in the 50th minute when she put the ball top shelf with an assist from Ella Hawkins.
The Knights scored their last two goals off corner kicks. They tied it back up in the 62nd minute and took the lead two minutes later to win 4-3.
Elyse Gowen (2-2) guarded GSW’s goal in the first half and allowed two goals. Chelsee Wright played the second half, recording five saves and allowing two goals.
The Lady Hurricanes recorded 16 shots while MGS had 18. Both teams had nine shots on goal. 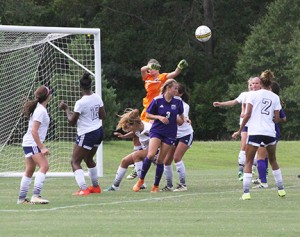 In men’s action, the first goal of the match came in the 34th minute when Jonathan Barragan controlled the ball at the top of the box for Middle Georgia and proceeded to roll a shot inside the left post.
Ryan Mitchell found Victor Masvikeni in the top left corner of the box in the 71st minute to set up the final score of the match. Masvikeni took the cross from Mitchell and fired it over GSW keeper, Joshua Swift.
The Knights finished with a 12-2 shots on goal advantage and a 9-2 edge in corner kicks.
Swift followed his Peach Belt Conference and GSW record-breaking, 22-save performance on Saturday with 10 saves against Middle Georgia.
Knights keeper, Petur Mar Bernhoft, made a save each in half.
The Lady ‘Canes are home on Sept. 17 to host Armstrong in their first Peach Belt Conference game at 3:30 p.m. The Hurricanes hit the road on Sept. 17 for Selma, Ala., and a non-conference match against Concordia College at 3:30 p.m.

Sumter Cycling, RVRC, team up with NPS to host…